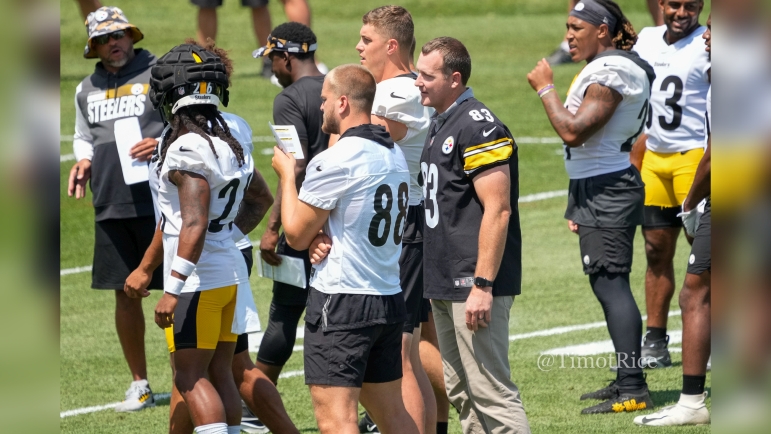 The Pittsburgh Steelers unveiled the Hall of Honor class of 2022 yesterday, and it included a face that should be familiar to just about any fan who has been around for more than a few years. The only living member of this year’s class, former Pro Bowl tight end Heath Miller will be formally honored with an induction later this year.

Drafted in the first round in 2006 in Bill Cowher’s final season, Miller thus spent nearly the entirety of his career playing under Mike Tomlin. And he long embraced that mentorship role in the tight end room, most notably with Matt Spaeth. Even in retirement, he’s forged a relationship with the team’s latest standout tight end, Pat Freiermuth, a second-round pick out of Penn State in 2021.

Miller, along with some other alumni, were in Latrobe yesterday, the tight end of course to accept his induction notice and speak to the media. There, he had an opportunity to catch up with Freiermuth, whom he met last year, even as far back as the NFL Scouting Combine.

“Man, it’s great to see big Heath Miller. It’s a cool thing to be in this position long enough to get guys to come back and to receive the recognition from their playing days, but equally important, just to come back and see them share and spend time with the current player”, Tomlin said yesterday.

“I smile when I watch Pat talking to Heath”, he added. “We had Vince Williams here today, and Max Starks and others. We had Aaron Smith yesterday. That brotherhood, that fraternity, man, you can’t describe it, but you feel it, and it is appreciated”.

Freiermuth is currently out of practice with a minor injury, though one that hopefully should not keep him out much longer. As a rookie last season, he tied the team’s rookie tight end record for the most receptions with seven, catching 60 passes for 497 yards and also serving as a developing blocker.

He is the only tight end that the Steelers have drafted within the first three rounds since Spaeth in 2007, with Miller a first-round pick just a year prior to that. The only other major contributor they drafted at the position in between was Jesse James, at least prior to Zach Gentry’s development of last season.

Himself a 2019 fifth-round pick, Gentry is beginning to grow into a strong complementary number two tight end with Freiermuth, the two of whom quickly became good friends. I’m sure they both greatly appreciate the opportunity to have Miller around, both representing the closest things they have had to him since he retired, James and Vance McDonald not excepted.