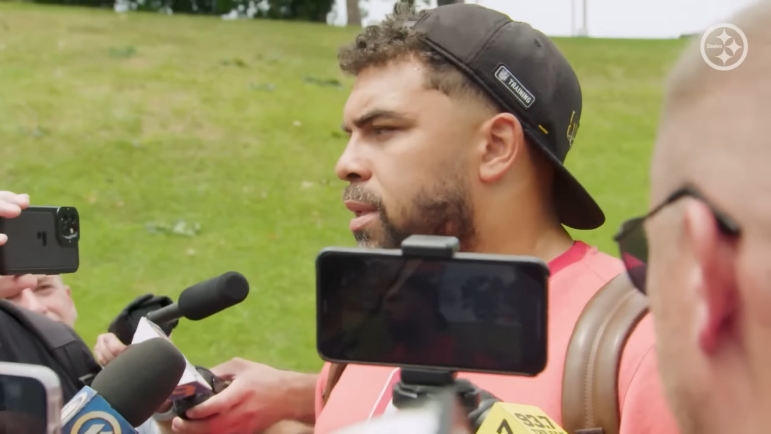 When you lose somebody important in your life, even if it is in only one key facet of your life, it tends to be that there is no replacing that person. You can find people who serve similar roles or purposes, either practically or emotionally, but something has fundamentally changed.

That’s what the Pittsburgh Steelers defensive line room is going through in the wake of Stephon Tuitt’s retirement. The 29-year-old made the difficult decision earlier this year to step away from the game and focus on other areas of his life following the tragic death of his younger brother.

While he remains in Cameron Heyward’s life, however, he is out of a big chunk of it—the professional part. The football part. The Steelers signed Larry Ogunjobi soon after Tuitt’s retirement, but that’s just a new guy. It’s different.

“How do you offset his departure? That dude was a monster”, Heyward told reporters on reporting day yesterday at Saint Vincent College, via the team’s YouTube channel. “Tuitt, he’s my guy, and we’re never looking to replace him, but we’re looking to replace what he brought to the team, what he did on the field. We called him Mustang because he was always revving around and always making big plays”.

A second-round draft pick in 2014, Tuitt actually had the best season of his career in 2020 and looked to be on his way to fully realizing his great potential. But he never saw a snap last year, and they had to make do without him. They have had a little more time to prepare for his absence this time around, as well as a little more resources, which resulted in them signing Ogunjobi.

“I didn’t have a relationship outside of just signing him, so I’m interested to get to get to know him”, Heyward said of his newest veteran teammate, whom the Steelers signed only after mandatory minicamp. “We didn’t even get OTAs together, so this is a good time to really bring in some of those new, fresh faces and get to know them”.

While they are new to the same locker room, however, Heyward and Ogunjobi are not unfamiliar with one another. Ogunjobi, a New Jersey native, was drafted in the third round by the Cleveland Browns in 2017. He spent last season with the Cincinnati Bengals, so he’s quite familiar with AFC North play.

But he’s not Tuitt, and that’s not a qualitative comparison. They’re just not the same player, not the same personality. Tuitt is gone out of that locker room in every sense. Ogunjobi’s in there now, and it will be different—and it has to be—but it can still be something great.

“Time will tell”, the defensive captain said about how the group comes together to replace Tuitt’s role on defense, and how they will perform. “We’ve got like five or six weeks before our first game, so we’ve got to continue to grow and see where we are at the end of this”.