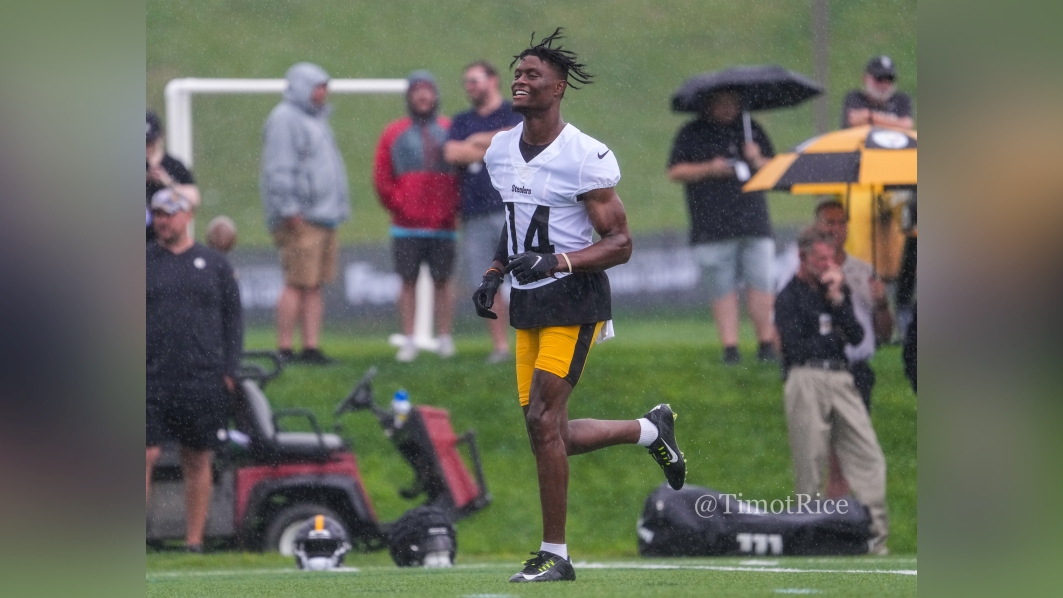 Come back with me down memory lane as the second round of the 2022 NFL Draft had reached its midway point and the Pittsburgh Steelers were on the clock at #52 overall. They had already selected QB Kenny Pickett in the first round and the belief was that they would likely target a wide receiver somewhere on Day Two. With the likes of Skyy Moore, George Pickens, and Alec Pierce available, it seemed like high certainty that wideout would be the pick for Pittsburgh.

That’s when WR Chase Claypool took the stage in Las Vegas and announced that he would have a new teammate in the receiver room: Georgia WR George Pickens.

Fast forward to July 29 and the Pittsburgh Steelers have taken the practice filed for the third day of training camp practice. Prior to practice starting, Claypool was stopped by the media and got asked several questions which included his usage in the slot, the QB competition, and specifically how Mason Rudolph has looked thus far.

When asked about George Pickens and his prospects for the 2022 season, Claypool was pretty straightforward regarding his thoughts of what Pickens is capable of this season as a rookie.

“I think he’s going to be the best rookie receiver in the NFL,” Claypool said on Pickens per the Pittsburgh Tribune-Review’s Chris Adamski.

Seeing as Pickens has been added to the WR room not only to replace the losses of JuJu Smith-Schuster, James Washington, and Ray-Ray McLeod this offseason, but also to push Claypool who is coming off a down 2021 campaign, Claypool’s comment on Pickens can be seen as maturity and growth as a teammate from the Notre Dame product. He could look to Pickens as competition, but rather Claypool sees him as a comrade that will help the offense be more explosive this season, hopefully leading to more points scored and the opportunity to win more football games.

Should Pickens manage to see the field early on in 2022 as a rookie, there isn’t a reason to think that Claypool’s statement is far-fetched. Pickens was often regarded as the #1 WR prospect in the 2022 draft class before suffering a torn ACL in spring football at Georgia, missing a large portion of the season, but managed to battle back from injury to make an impact on the football field for the Bulldogs on the way to winning a National Championship.

While Mike Tomlin and former GM Kevin Colbert have admitted that Pickens is raw given his lack of experience at the college level, they also recognized the level of talent and pedigree there with him and how much room he has for growth as a receiver in the NFL.

Were it not for the ACL tear, there is a good possibility that Pickens would have been a first-round draft pick, and potentially the first WR drafted from his draft class. Were he taken in the top ten like Drake London and Garrett Wilson were, it wouldn’t be as much of a hot take to consider Pickens the best rookie WR in the NFL.

He will have major target competition with Diontae Johnson and Chase Claypool also on the depth chart as well as Pat Freiermuth and Najee Harris soaking up targets. However, the change of QB could result in targets being distributed differently than they were with Ben Roethlisberger under center. Should he prove to coaches he’s ready to be in the starting lineup Week 1 against the Cincinnati Bengals, Pickens will have just as good of a shot as many of the WRs drafted ahead of him to capture that title of best rookie WR in 2022.

George Pickens has been impressive early at Steelers training camp, as he is already playing with the first team.