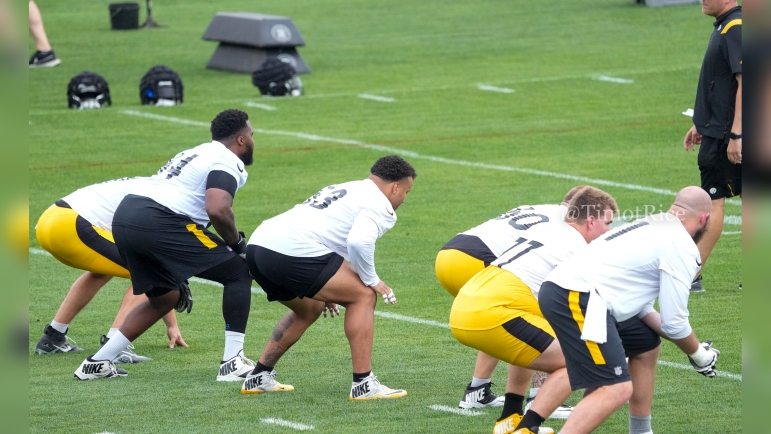 Coming out of an offseason that featured a number of changes on the roster and in the coaching room along the offensive line for the Pittsburgh Steelers, plenty of questions remain for one of the league’s worst starting units overall.

Throughout the 2021 season the Steelers’ offensive line was downright dismal as a run-blocking unit, struggling to protect an aging Ben Roethlisberger, and really negating any sort of progress the Steelers’ offense attempted to make last season under new offensive coordinator Matt Canada.

Ahead of the 2022 season, though questions remain there is some hope for the projected starting five in left tackle Dan Moore Jr., left guard Kevin Dotson, Cole and Daniels at center and right guard, and Okorafor at right tackle, though Dotson finds himself in a position battle with second-year pro Kendrick Green, who is reverting back to guard after struggling mightily at center in 2021.

On paper, it doesn’t look great, but it appears to be a lot better than last season’s unit, especially down the stretch when the Steelers were forced to play their third-string left guard in John Leglue, who more than held his own.

“…We got a young line. I’m excited with the development that Dan Moore had last year, having a chance to start at that critical position at left tackle. I think he’s only gonna get better from here on out. And that [Kevin] Dotson comes back healthy. That left side is gonna be good. And Chuks [Okorafor] is that he is natural position,” Essex said to The Fan morning show Thursday, according to audio via 93.7 The Fan. “So I’m confident in our front five, and even still with JC [Hassenauer] and, John Leglue getting experience last year. We got guys behind them who had gotten some snaps and we didn’t have that last year.

“We had a very young crew that had almost no experience outside of Chuks. And so this year is completely different,” Essex added, according to audio via 93.7 The Fan. “We got experience up front. We got guys backing them up that also has experience. I’m interested to see what Kendrick Green is gonna do. I know it was a disappointing rookie year for him last year, but he’s had an offseason to hopefully get that lower body stronger. And he showed athleticism and I think he could really contribute as a guard, because you saw that center wasn’t necessarily his best position, but I’m really interested to see what he does at camp this year.”

While the group as a whole really struggled in 2021, there is certainly reason for optimism from the projected starting five in 2022. A full offseason of development at left tackle for Dan Moore Jr. can go a long way in the NFL, as will some health for Kevin Dotson at left guard, who will have to hold off Kendrick Green in a training camp battle.

That battle will only make the pair better in the end, which will improve the depth of the Steelers’ offensive line overall under first-year offensive line coach Pat Meyer.

Realistically, things can’t be as bad as they were in 2021 along the offensive line, especially from a health standpoint. There’s plenty of depth and experience up front. Now, it’s about putting it all together under Meyer’s direction in 2022. Doing so will play a major factor in the success or failure of the Steelers’ offense this fall.