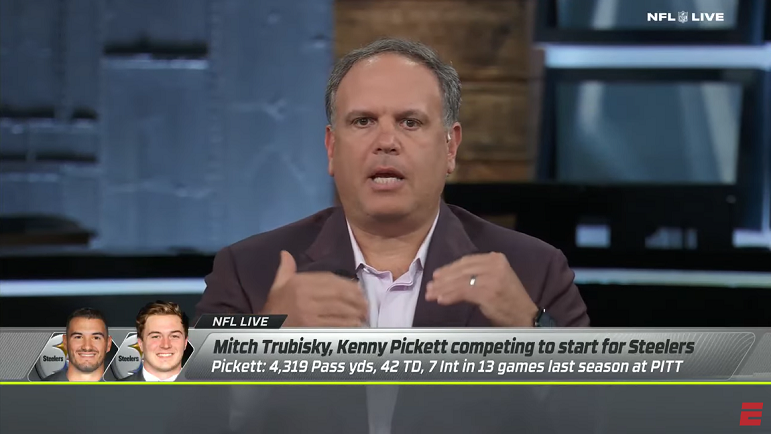 Coming out of the University of Pittsburgh in the 2022 NFL Draft as the top quarterback in the class after a historic season with the Panthers, current Pittsburgh Steelers’ rookie first-round draft pick Kenny Pickett drew lots of comparisons to the likes of Tony Romo, Teddy Bridgewater and Andy Dalton.

The ONLY quarterback over the last 70 years to throw for 525+ yards and 5 touchdowns in a single game?

Not exactly flattering overall, but a decent comparison nonetheless.

Schaub, a former third-round pick of the Atlanta Falcons in the 2004 NFL Draft out of Virginia, played in 155 career games in the NFL, starting 93 of them. His best run as a starter came with the Houston Texans under head coach Gary Kubiak from 2007 through 2013, earning two trips to the Pro Bowl while going 46-42 as a starter with the Texans, making the playoffs just one year in 2012, reaching the AFC Divisional Round.

Pickett has a similar play style to Schaub as a sound mover in the pocket, an adequate arm with easy accuracy, but also serious ball security issues within the pocket. According to Tannenbaum, that was the biggest knock on Pickett – his No. 1 quarterback in the class — coming out of Pittsburgh.

Tannenbaum believes Pickett can correct the ball security issues, but it’s something that will take time and development, something the Steelers can certainly afford to do with Pickett with Mitch Trubisky and Mason Rudolph ahead of him in the depth chart.

“When you’re go describing a player, you’re looking at height, weight speed, and all the other measurables. He has very small hands by any standard in the NFL and he fumbles. And when you drill down and you’ve had 27 fumbles, they lost the 11 of them. That was the concern coming out,” Tannenbaum said on NFL Live regarding Pickett Friday, according to video via ESPN’s YouTube page. “And it’s very justified. With that said, I actually like him a lot. He was my first quarterback. He reminds me a lot of Matt Schaub. I think he’ll be a good player. You can drill ball security, but make no mistake about it: it’s not the small hands that’s the concern. It’s the number of fumbles he had in college.”

Some can correlate the small hands to the fumble issues Pickett had in college at Pittsburgh over four seasons, but it doesn’t matter how big or small your hands are if you’re loose with the football. That’s what Pickett was in college, especially in the pocket, tending to drop the ball down around his hip while trying to extend plays, leading to defenders knocking the football out.

Ball security can be drilled, as Tannenbaum said, but it’s not something that’s going to be magically fixed overnight. I’m sure Pickett was doing ball security drills in college at Pittsburgh, but those fundamentals can get tossed aside once under fire in the pocket, reverting back to his loose style of play in the pocket.

For comparison’s sake, Schaub fumbled the football 46 times in his career, including 38 in Houston, which saw him have seasons of seven fumbles in 2007, 10 in 2008, and nine in 2010 before getting this issue under control.

There’s still plenty of hope for Pickett when it comes to fumbling the football in the pocket. As Tannenbaum pointed out, it can be drilled out of him, but it will take time and patience.