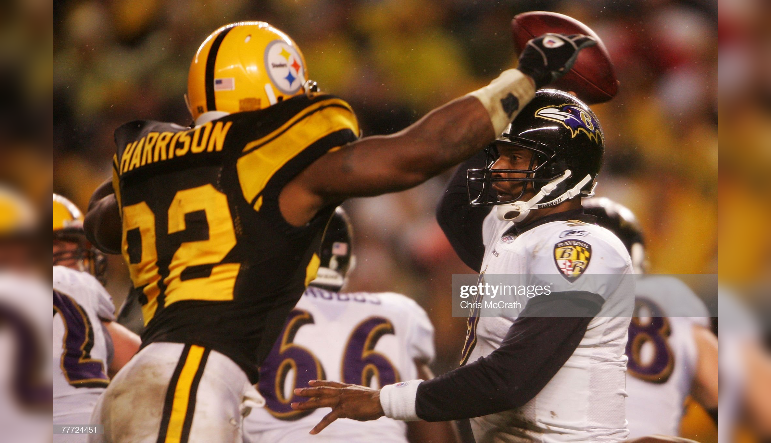 In an AFC North battle between the Pittsburgh Steelers and Baltimore Ravens, the black and gold received some incredible performances from quarterback Ben Roethlisberger and linebacker James Harrison, making the members of the Steelers’ 75th Anniversary Team — which was to be honored at halftime — proud as they looked on at the new-age Steelers.

That night, everything went right for the Steelers as Pittsburgh forced three first-quarter turnovers and added a fourth in the second quarter, Roethlisberger became just the second quarterback in NFL history to throw five touchdown passes in the first half of a game, and Harrison had his breakout performance in front of a national audience as the Steelers raced out to a 35-0 lead over their bitter division rivals before cruising to a 38-7 win in head coach Mike Tomlin’s first season at the helm.

Quickly, the Steelers’ defense showed what type of night it was going to be for the Baltimore offense led by quarterback Steve McNair.

Six plays into the Ravens’ first drive of the night, Harrison raced in off left end unblocked to chase after McNair, eventually forcing a fumble from the standout quarterback before recovering it himself in the pile, setting the Steelers’ offense up in great shape early in the division matchup.

After missing McNair initially in the pocket on the clean shot at him, Harrison did a tremendous job recovering quickly to track down McNair and get a helmet on the football, knocking the pigskin loose.

Three plays after Harrison’s forced fumble,e Roethlisberger went vintage Big Ben early in his career, avoiding a sack from Baltimore’s Trevor Pryce before scrambling to his left and uncorking a perfectly-placed football to standout tight end Heath Miller in between two defenders for the score, giving the Steelers a 7-0 lead just over seven and a half minutes into the Monday night matchup.

Seeing Roethlisberger make those types of plays again sure brings back great memories. There was no quarterback better at shrugging off defensive linemen and linebackers in the pocket before then readjusting his eyes downfield and making a play on the run with his right arm, putting points on the board. He was such a special player at the height of his powers.

A few possessions later, Harrison struck again for the Steelers.

Following a three-and-out possession by the Steelers’ offense, Pittsburgh punter Daniel Sepulveda came onto the field and punted 45 yards to the other side of the field to the dangerous Ed Reed for Baltimore. Reed made a career returning interceptions and fumbles for scores with some incredible open-field moves, but on this night that wouldn’t happen on Harrison’s watch.

Harrison tracked the Ravens’ star across the field and unloaded a textbook tackle on Reed, putting his helmet right on the football once again, popping the football high into the air before it came down into Lawrence Timmons’ hands for the fumble recovery, giving the Steelers’ offense great field position once again.

Man, what a play by Harrison. Great hit, great finish.

Five plays after Harrison’s great lay on special teams — and thanks to two defensive penalties on the Ravens — Roethlisberger fired a strike to wide receiver Santonio Holmes just underneath the crossbar of the field goal between two Ravens’ defenders for a 14-0 lead with 1:48 left in the first quarter.

When he was younger, Roethlisberger’s arm strength was supreme. He fired an absolute dart here with great accuracy for the score.

Holding the two-score lead, the Steelers turned up the heat.

Roethlisberger and the Steelers cashed in quickly once again, this time as Roethlisberger scrambled to his right and lofted a pass to the wide open Nate Washington for the 30-yard score, extending Pittsburgh’s lead to 21-0 39 seconds into the second quarter. Notice who Roethlisberger avoids in the pocket as well? Yeah, that’s Terrell Suggs.

With a huge lead in hand, the Steelers weren’t done in the first half.

Pittsburgh forced two quick Baltimore three-and-outs before the Steelers’ offense struck again. This time, it was Roethlisberger to Holmes for the second time on the night on a deep shot down the right sideline.

Facing a third and nine from the Baltimore 35 yard line, Roethlisberger dialed up the deep shot to Holmes, dropping the throw perfectly into a diving Holmes’ breadbasket for the score, extending the lead to 28-0, giving Roethlisberger four touchdown passes on just 8-of-11 passing to that point. Talk about efficiency.

On the next Baltimore offensive drive it was Harrison again, this time in coverage.

Faking a pass rush, Harrison dropped into the middle of the field and read McNair’s eyes, jumping a crossing route for the interception, returning it 20 yards before burying Baltimore receiver Derrick Mason into the sideline to finish off the return.

One final time in the first half, the Steelers’ offense took advantage, in the process helping Roethlisberger tie an NFL record, as well as a then-team record held by Terry Bradshaw and Mark Malone.

Following quick throws to Willie Parker and Holmes for gains of 17 and 15 yards, Roethlisberger found Washington rolling out to his right on a play-action fake for the 7-yard touchdown in the front corner of the end zone, making it a 35-0 game, giving Roethlisberger five touchdowns in the first half as Hall of Fame receivers Lynn Swann and John Stallworth looked on approvingly.

Of course, Roethlisberger would go on to break that record of five touchdown passes in a game, recording six against the Indianapolis Colts and Baltimore Ravens in back-to-back weeks in 2014.

Late in the first half, McGahee found daylight against the Steelers, ripping off a 33-yard touchdown run to make it 35-7 at the half.

Things would stay rather quiet in the second half as Roethlisberger found Holmes for 45 yards before giving way to Charlie Batch. The Steelers’ drive eventually ended with a 22-yard field goal from Jeff Reed, making it 38-7.

Late in the game, Allen Rossum ripped off a 49-yard punt return for good measure before Batch kneeled twice to seal the blowout win, moving the Steelers to 6-2 on the season.

Defensively, the Steelers held McNair and backup quarterback Kyle Boller to just 84 passing yards on the night while sacking Ravens quarterbacks six times in the win. Harrison finished with a game-high 10 tackles, 3.5 sacks, one pass deflection, an interception and six quarterback hits in a display of dominance the Steelers haven’t quite seen defensively since. James Farrior and Travis Kirschke added one sack each, while Clark Haggans added half a sack with Harrison.

Sitting at 6-2 on the season after the blowout win, the Steelers then won three of their next four, before dropping two of their last three down the stretch before getting knocked out of the playoffs in the Wild Card round by the Jacksonville Jaguars in Mike Tomlin’s first season, finishing 10-6 on the year.