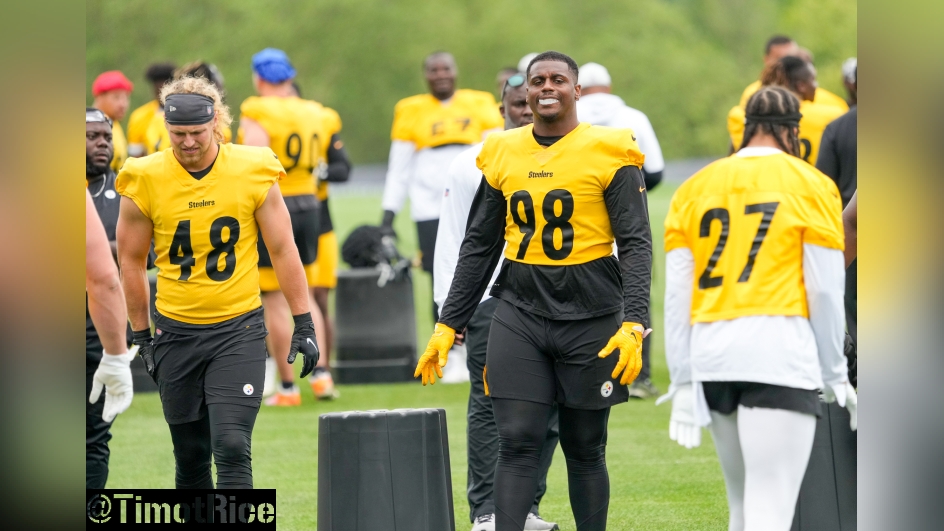 For a third-round draft pick, Texas A&M defensive tackle DeMarvin Leal has really seemed to fly somewhat under the radar within the Pittsburgh Steelers’ draft class. Taking a quarterback in the first round after your 18-year-veteran franchise quarterback retires will do that for you, but their second- and fourth-round wide receivers have also drawn much more attention—as has sixth-round H-back Connor Heyward, thanks to his family ties.

But with the Steelers finally in training camp, and the eyes on him, Leal actually is getting noticed. Our own Alex Kozora is just one of a number of observers who have come away impressed with what the rookie has shown in the very early stages of his journey. He was even included on Bucky Brooks’ list of rookies he “can’t wait to watch in training camp”:

The ultra-talented Leal could enjoy a banner rookie season in a defense that will enable him to play fast and free at the line of scrimmage. The 6-foot-4, 290-pounder is a long, rangy interior defender with the strength and athleticism to drive guards and tackles crazy at the point of attack. As a fluid mover with solid instincts, Leal could flourish on a front that features Cam Heyward and reigning Defensive Player of the Year T.J Watt. If Leal quickly grasps the concepts and techniques preached by defensive line coach Karl Dunbar, the third-round pick could become a problem for opponents attempting to attack the middle of the Steelers’ defense.

The biggest problem, of course, is finding playing time, as the Steelers have not only Heyward along that defensive line, but also Larry Ogunjobi and Tyson Alualu, although neither are fully healthy right now. Chris Wormley and Montravius Adams are among the others who stand in front of his path to playing time, alongside perhaps second-year Isaiahh Loudermilk.

The fact is that the Steelers are deep along the defensive line right now if measured by those whom we anticipated making the roster. What the end result will look like in-game when the results of their efforts actually matter, that remains to be seen, but many have long predicted that they will have to keep seven defensive linemen in 2022, which is very out of the ordinary.

Leal’s roster spot is, of course, safe, as it’s incredibly rare for a third-round rookie draft pick not to make a team, but there’s no guarantee that he will actually dress anytime soon. Simply due to the available bodies in front of him, it’s not inconceivable that he spends a good amount of his rookie season as a healthy scratch.

So perhaps it would be wise for Brooks to get out there and see Leal in training camp, because that could be the most we see of him in 2022. Unless he really stands out and forces his way onto the field, he could be doing a lot of observational learning on the sidelines this year.