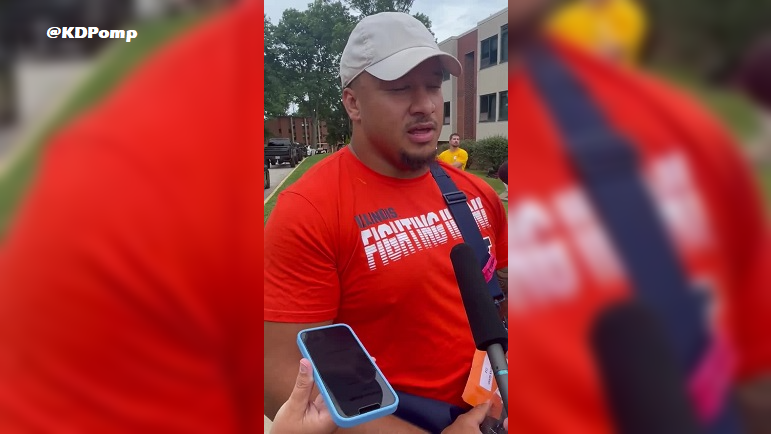 It was a rather rough transition to the NFL as a third-round pick last season for former Illinois standout interior offensive lineman Kendrick Green.

Hope was high for Green, but things derailed quickly as he made the full-time switch to center from guard after having played just four games in college at center. Now, after some serious changes to the offensive line in the offseason, including free agent signings and two new position coaches, Green is aiming to bounce back in his second season with the black and gold, albeit in a reserve role — for the time being.

Arriving at Saint Vincent College Tuesday morning ahead of his second training camp with the Steelers, Green is slated for a position battle with left guard Kevin Dotson. Back in his familiar position at guard, Green stated to assembled media members Tuesday that he’s comfortable playing all three interior positions on the Steelers’ offensive line (left guard, center, right guard), and feels much more comfortable in the day-to-day grind of the NFL in general.

“I know I can play all three interior [positions], but, I want to try and kind of want to settle in at that left guard and try to be the guy there,” Green said to assembled media Tuesday, according to video via KDKA-TV’s Bob Pompeani’s Twitter feed.

Though he’s changing positions — again — so early in his NFL career, Green has nearly a full season under his belt with the Steelers, getting himself familiar with the offensive scheme under second-year coordinator Matt Canada. While things didn’t go as planned as a rookie for Green, the bumps and bruised along the way have prepared him for his second season, which he hopes to get off on the right foot in training camp at Saint Vincent College.

“Just knowing the offense, learning Coach Canada’s system, I kind of know almost everything like the back of my hand now. It’s something I’m real comfortable with,” Green said, according to video via KDKA-TV’s Bob Pompeani’s Twitter feed. “And then just being adjusted to the NFL in general, you know what I mean? The daily management, being the NFL player. So I think, just a lot of growing pains last year.”

There were certainly growing pains for Green, but those trials and tribulations from a rocky rookie season have him better prepared for the work ahead in 2022 for the black and gold.