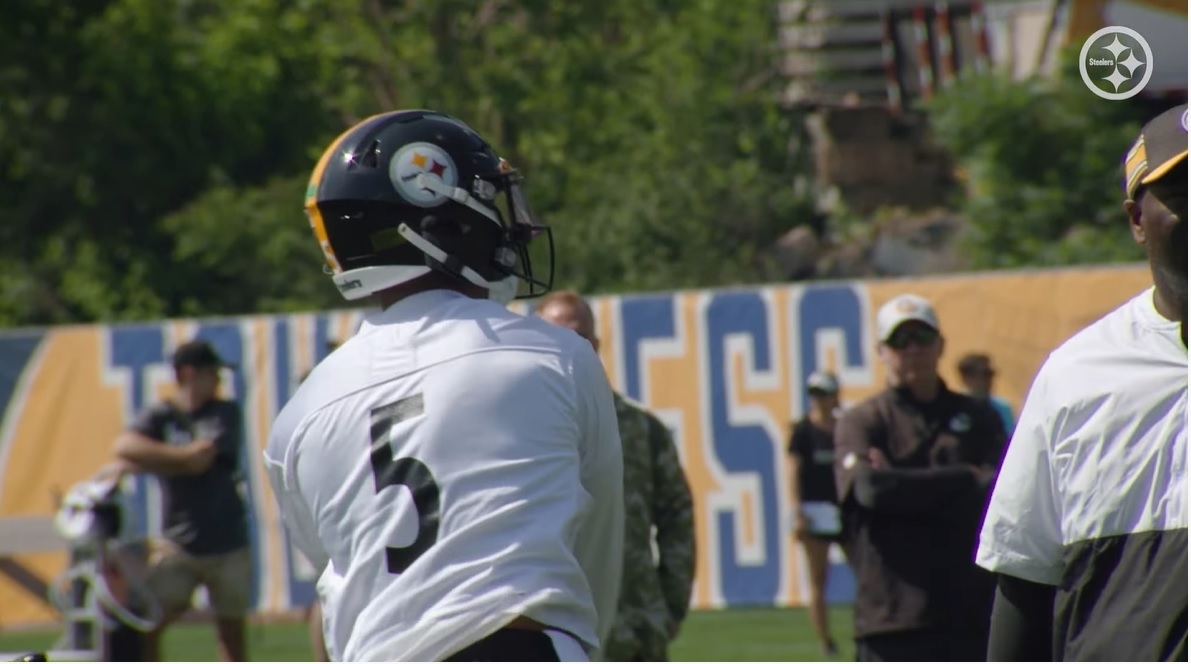 The Pittsburgh Steelers are entering a period of change, and nothing exemplifies that more than just how unfamiliar the quarterback room is. Gone is Ben Roethlisberger, who spent the past 18 years patrolling the halls of the UPMC Rooney Sports Complex. The only quarterback remaining from last year’s room is Mason Rudolph, and many are wondering if he will make the team this year.

If he doesn’t, then it will be thanks to Chris Oladokun, the second of two quarterbacks that the Steelers drafted in 2022. A seventh-round pick, he understands that he has his work cut out for him in a room with Mitch Trubisky and Kenny Pickett, a couple of former first-round draft picks, Rudolph serving as his most direct competition. And he knows he must rely on his skillset to set himself apart.

“I think I bring a lot of athleticism with my feet and how I can extend plays outside the pocket, the different arm angles and slots I can throw in”, he said during spring drills, according to Teresa Varley for the team’s website. “The quarterback position has definitely changed, and I don’t think there’s a better time to come into the National Football League. I bring that athletic component”.

Oladokun ran a 4.71-second 40-yard dash time, so he can certainly scoot, but it’s better seen on his actual game tape rather than a set of numbers. His ability to move around in the pocket, and behind the line of scrimmage in general, is an attribute from the quarterback position that the Steelers have been lacking in Roethlisberger’s final years.

They believe that they have upgraded in that area substantially this offseason, however. While they don’t have any Lamar Jacksons or Kyler Murrays on their roster, they see mobility traits that can work functionally in today’s offenses in Trubisky and Pickett and Oladokun—and, to a lesser extent, perhaps Rudolph as well. The rookie was gracious enough to include him in that mix.

“All the guys in the quarterback room are mobile. I don’t think we have any statues back there in the pocket”, Oladokun said, and to Rudolph’s credit, he actually did show better pocket mobility in his one game of action last season. But it’s a far cry from what a guy with a 4.71 40 time can do.

“With my mobility, we see a lot of good defensive ends and defensive tackles in the league nowadays”, Oladokun continued. “It’s a challenge getting away from those guys and extending the plays. It’s something that gives me a leg up because of how mobile I am and how I can create”.

He will be well-served to lean heavily into that skillset as he works to round out his game. He has to speed up his processing time in addition to working on his ball placement particularly on intermediate throws and in reading defenses. But being able to run around in the backfield, even scramble here and there, will buy you a lot of time.