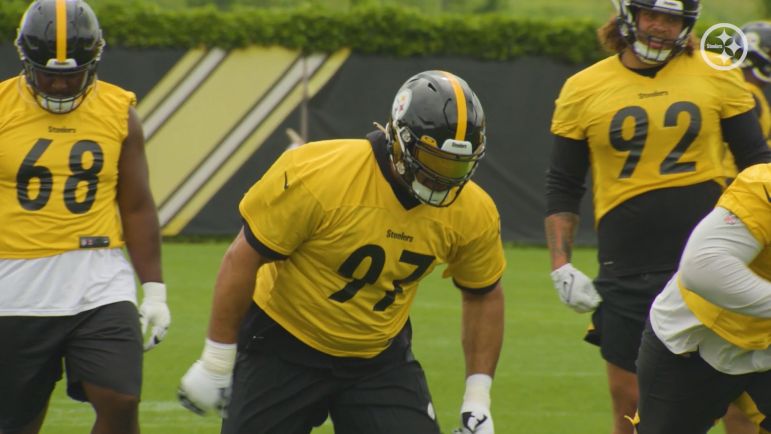 From 20th to 1st. That’s Cam Heyward’s goal. Speaking to reporters shortly after reporting to training camp Tuesday, Heyward said he wants Pittsburgh’s defense to return to an elite level. And not just elite but the best group in football.

Pittsburgh fell short in plenty of categories last year but none more obvious or severe than their run defense. Despite Heyward playing arguably the best football of his career, the Steelers finished with not just the 32nd-ranked run defense but the worst run defense in team history, allowing 5.0 YPC. Six times last season Pittsburgh allowed an opponent to run for 150+ yards, all coming between Weeks 10 and 18.

Much of that had to do with poor health of the group, losing Stephon Tuitt, Tyson Alualu, and others, forcing inexperienced and overwhelmed players like Henry Mondeaux and Isaiah Buggs to try to fill in the gaps. Pittsburgh’s group is healthier with Alualu returning along with the addition of DL Larry Ogunjobi, though his immediate impact isn’t known coming off a foot injury suffered during last year’s playoffs.

The Steelers’ pass rush should remain strong, owning or tying for the sack lead in each of the past five years with 50+ in each of those seasons. T.J. Watt will return as one of the league’s most dominant defenders, tying Michael Strahan’s sack mark of 22.5 last season. Fully healthy this year, he could aim to break that number. Alex Highsmith’s said his goal is to crack double-digit sacks, an achievable number if he picks up where he left off last season. The team will just have to figure out the depth behind those top two. Inside linebacker player must improve from a year ago when Joe Schobert and Devin Bush struggled, though the issues along the D-line did them no favors. Myles Jack was signed over from Jacksonville and could be the team’s every down linebacker while Bush is two years removed from his torn ACL. Hiring Brian Flores, who will primarily work with the ILBs, will help.

Adding Levi Wallace at CB will provide stability and a solid run defender while Ahkello Witherspoon is in for a big year, needing to be the team’s top cover corner as he was down the stretch last season. He’ll need to prove he can do it over a 17-game season. Overall, the Steelers’ secondary is in search of more splash plays and fewer missed tackles. Minkah Fitzpatrick wasn’t part of that problem a year ago but seeing his tackle numbers dip under triple-digits would be a good sign for the overall health of this defense.

Obviously, Heyward has lofty goals as the #1 defense and Pittsburgh would need a dramatic turnaround to hit that mark. But good leaders set high goals, not average ones, and if the Steelers can be a top ten defense, they should be in the playoff hunt to the very end.