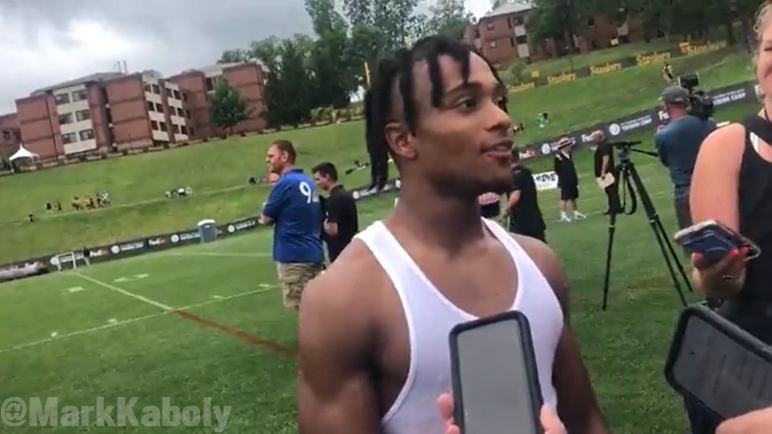 Ignoring the fact that it’s comically early to make any kind of statements like this, one might say that rookie fourth-round draft pick Calvin Austin III was one of the stars of the Pittsburgh Steelers’ first training camp practice, although both rookie wide receivers had their shining moments.

While Austin had a long, blazing catch-and-run touchdown off of a screen from Mason Rudolph, it was the overall cumulative effect of seeing his speed translate—even in practice—at the NFL level that was the biggest takeaway.

Alex Kozora notes that if this were a full-contact drill, he doesn’t believe Austin would have actually scored on that play, but the Memphis alum would probably disagree. “I got out, but I didn’t even put on the afterburners”, he told reporters about his catch and run, according to Teresa Varley for the team’s website. “If somebody was closer, I had another gear or two for sure”.

While Austin’s speed was routinely apparent on his college tape, he affirmed that it’s real with a blazing Combine 40-yard dash time of 4.32 seconds. And that showed up better on the field than it did for Dri Archer back in 2014. Who actually ran a 4.26, but never played like it.

Of course, pads are a game-changer, and that’s where Archer really struggled to take advantage of his speed. Austin still has to show that he can get that same separation in a more football-like context, especially inside of a stadium, but I’m not too worried about that, personally. His speed is documented.

But there’s a lot more to being an NFL player, and a wide receiver, than being fast, and the rookie knows that. He’s very much in the learning process, about how to be a professional, about how to function within the offense, about the nuances of his craft—just about anything you could think of.

“Every day for me is going to be important just learning”, Varley quotes him as saying, though he also expressed confidence that speed will always be an asset for him. “It’s important to show my speed any time I step on the field because that is one of the main factors of my game, something I have to continually show. It’s big, but at the same time is something I will be consistent with and hopefully will become the norm”.

He already showed it on day one, but there are still several more hoops to jump through, and that’s without even taking into account considerations such as actually finding opportunities for him to see playing time. After all, George Pickens is looking like the real deal, as well.

One thing, though, that’s never a problem is having too many talented wide receivers. The Steelers would love to be at least four-deep in terms of quality if both Pickens and Austin can pan out, as they begin the process of solidifying their depth chart.