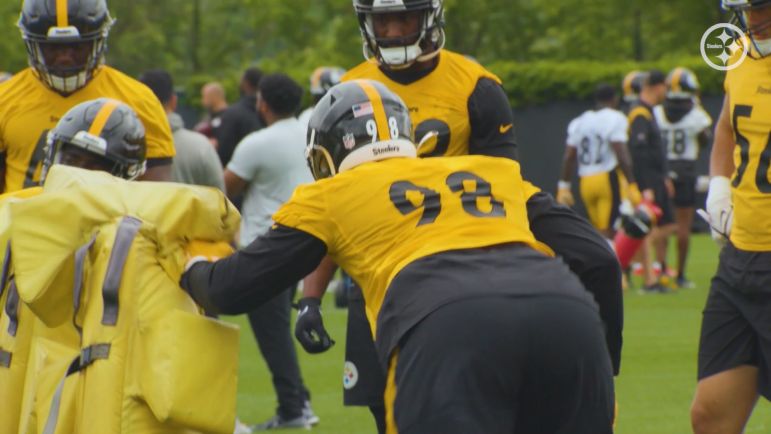 Explanation: Even though he doesn’t have an obvious path to the field due to the depth along the defensive line, as a third-round pick, DeMarvin Leal is pretty much guaranteed a roster spot. But as a talented player, he could very conceivably start to work his way up the depth chart quickly and be active if his performance dictates it.

Leal is the highest the Steelers have drafted a defensive lineman since Jarvon Hargrave in 2016, who was also a third-round draft pick. While Chris Wormley certainly deserves some respect, there is no reason to think that the rookie couldn’t dress at some point this year.

That would be especially simple if the Steelers intend to use Larry Ogunjobi as one of their two defensive tackles on gameday, allowing them to dress multiple reserve ends. Of course, the Steelers also claim to view Leal as interior-capable, and he himself has said that he’s put on the weight, so it’s all the more reasonable with his versatility that he could get a hat, with his biggest competition being a second-year fifth-round pick and a guy who they signed off of a practice squad last year.

That former fifth-round pick and that former practice squad guy, however, both did pretty well for themselves in the black and gold when they played last year. Those men would be Isaiahh Loudermilk and Montravius Adams, respectively.

Adams is the bigger conversation here as a defensive tackle. They liked him so much that they re-signed him to a two-year contract as a free agent. There’s no way that he doesn’t dress as one of their two tackles behind Tyson Alualu. Nobody else has his off-the-line quickness.

Leal’s time will come, but frankly, it’ll have to wait. Wormley is their top reserve end and Adams is their top reserve tackle. They don’t even have room to dress Loudermilk, whom they’ll already have to try to squeeze in as a very rare seventh lineman. There just aren’t enough active-roster slots to dress everybody you might want to dress. At best, he might find himself in a two-dogs-one-bone situation in the second half of the year.