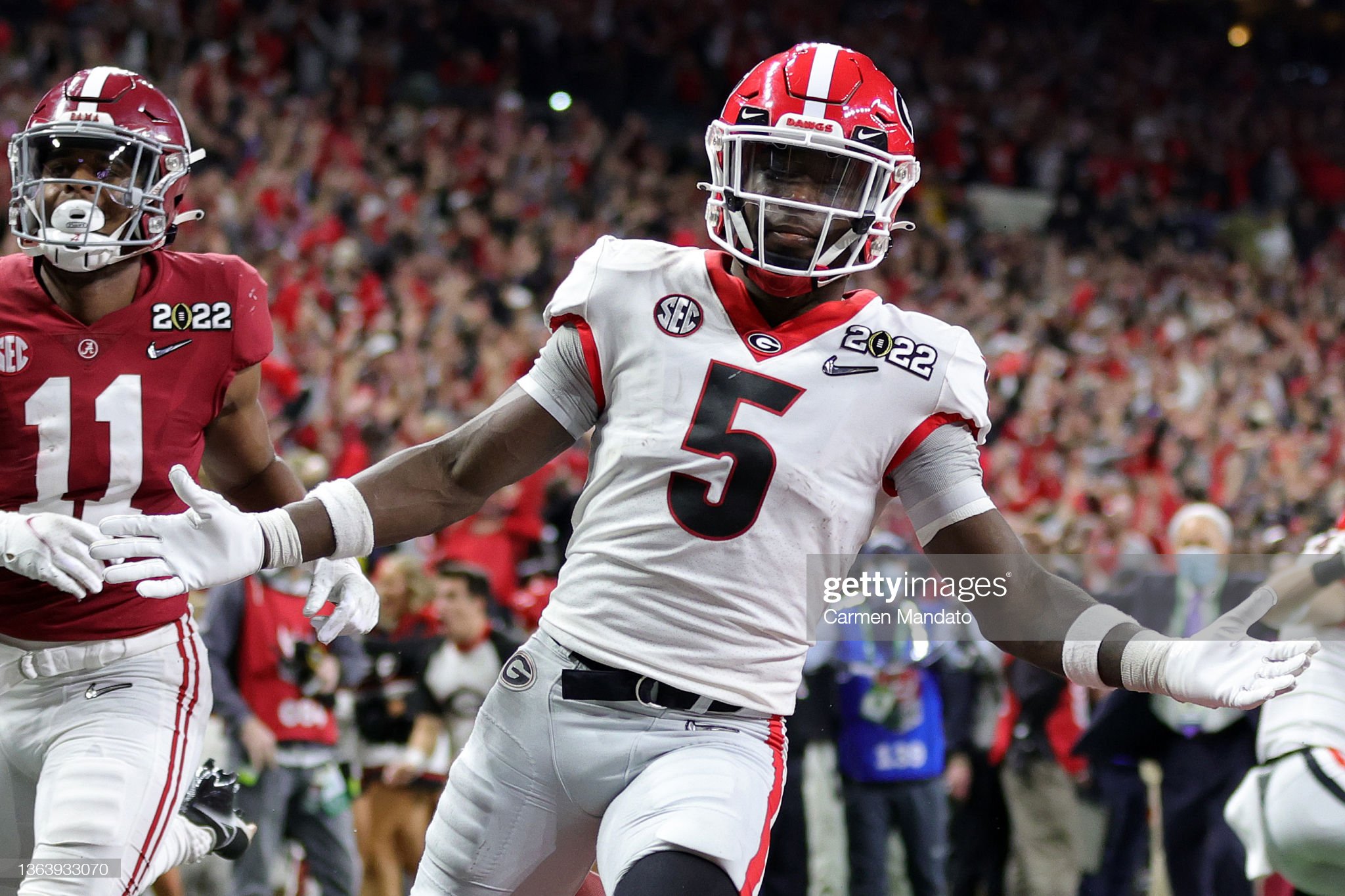 — Has great height and length for the position with a filled-out frame (6’2, 205lb)
— Played mostly outside with some experience in the slot
— Explosive athlete that has a track background, having the long speed to carry receivers down the field vertically
— Shows his leaping ability against the jump ball, competing with the WR at the catch point
— Comfortable playing with his back to the ball and singled up in man coverage along the sideline
— Has good ball skills in terms of challenging passes and catching the football
— Length and size aid in his ability to play press man at the LOS
— Has the strength and physicality to reroute receivers off course
— Can be sticky in coverage, allowing minimal separation when he stays in-phase
— Can play off-man and zone coverage reading the QB’s eyes to make a play on the ball once thrown
— Will roll up quickly on underneath throws to challenge at the catch point
— Willing and capable run defender that will run through ballcarriers on contact
— Size makes him a good tackler at the position on the outside
— Sniffs out the screen game well, flying up to stick pass catchers quickly
— Only has one year of playing experience in college, suggesting he has more room for physical growth and development

— Great athlete, but isn’t overly twitchy in terms of change of direction in space
— Fairly raw in terms of technique given his physical traits
— Feet can stall at times at the top of a WR’s route causing him to be slow at the break point and separation to occur
— Will guess on occasion as the receiver gets on his toes, taking a false step and gets out of position
— Will bite on double moves when a receiver is working vertically
— Can be too soft in zone coverage at times, allowing easy completions with room for YAC
— Physical press man corner, but may need to tone it back to avoid drawing penalties at the next level

— Redshirt Sophomore prospect from Tacoma, WA
— Born June 27, 2002 (age 20)
— Moved to Saguaro, AZ as a kid where he would play HS football
— Consensus five-star prospect who was ranked the #1 CB and #1 player from the state of Arizona, First Team All-American
— Selected to play for the West team in the 2020 All-American Bowl
— A world-class junior sprinter with the top 100 meter (10.43) and 200-meter times (21.18) in the state of Arizona as a junior, won AIA Division III state titles in both of those events in 2019
— Missed the entire 2020 season recovering from off-season surgery of a torn labrum, redshirting his first year on campus
— Played in all 15 games in 2021, starting in the last 12, and finished with 34 total stops, a sack, eight pass breakups, and two interceptions
— Freshman All-SEC Team (2021)
— Communication Studies Major

Kelee Ringo has the athleticism and pedigree you look for in a shutdown cover corner in the league. He was the #1 CB recruit coming out of high school back in 2020, but redshirted his first season on campus, recovering from off-season surgery to repair a torn labrum that caused him missed his entire freshman season. However, Ringo managed to make a full recovery and supplanted current Los Angeles Rams CB Derion Kendrick as CB1 for the Dawgs in 2021.

When you watch Ringo, you see a prospect that has the makings of a prototypical outside cornerback in the NFL. He has the size, height, and length at 6’2, 205lb to challenge big-bodied WRs at the catch point in man coverage and make plays on the football. Here is an example against UAB where Ringo carries the receiver up the sideline then leaps into the air once he locates the ball, plucking it out of the air like the intended target of the pass for the INT.

We saw a similar play made by Ringo when it mattered most in the CFP National Championship Game. He successfully carries the WR up the sideline then breaks off once he sees the underthrown pass by #9 Bryce Young, picking it off and running back the other way to seal a National Championship for the Bulldogs.

Ringo’s size and length make him an ideal press man corner, having the strength and arm length to physically reroute receivers off their route as well as the track speed to carry them vertically down the field. Here is one example against Alabama in the SEC Championship Game where Ringo runs step-for-step with #8 John Metchie, giving him no space to separate as the pass falls incomplete.

When he decides to get hands-on and jam at the LOS, Ringo can disrupt the rhythm of the passing game. Here against Vanderbilt, we see Ringo do just that as he takes the WR to the sideline and quickly comes back to the ball as it is thrown to play through the WR’s hands and knock the pass away.

When it comes to run support and tackling, Ringo fits the bill as a physical defender willing to come up and hit on the outside. He has a filled-out frame, allowing him to bring more stopping power when he makes contact with the opposition. Here is a swing pass to the tight end, Ringo breaks off coverage and gets off the block by #1 Jameson Williams to stop the TE in his tracks as the rest of the defense rallies to the ball, holding him to a short gain.

Here’s an example of Ringo sniffing out the screen pass to #1 Wan’Dale Robinson, breaking on the ball quickly as the QB turns to throw, arriving on the scene just as Robinson catches the ball, cutting him down. You would like to see Ringo square up better on the tackle attempt, but he manages to get the receiver down for no gain.

Still, Ringo isn’t without his warts as a prospect despite his physical talents. He has only played one college season and needs refinement on the technical skill to become the player he can be at the next level. While having good instincts in coverage, he can get too soft in off-man or zone at times, leading to ample separation for easy completions. Here’s one example against Kentucky where Ringo plays super soft by the line to gain, giving the receiver an easy pitch-and-catch on the comeback route as he makes a move to move the chains.

Ringo also has instances where his feet stall at the top of the receiver’s route, delaying his reaction to the break which allows separation to be created. Here is an example of this against Robinson in the slot as Ringo has his feet pause while breaks on the out route, reaching with his hands rather than pushing off his outside foot and mirroring the route. This allows enough space for Robinson to make the catch and move the sticks.

Ringo also tends to guess at times when the receiver gets up on his toes at the top of his route, resulting in him guessing wrong at times and leading to separation. Watch as Ringo anticipates an outside release by Metchie who takes a job step outside then cuts back inside, getting open. Thankfully, Alabama runs the ball on the RPO, not taking advantage of the open target.

Ringo’s toughest loss on the season comes on this deep ball TD by Jameson Williams in the SEC Championship Game. As mentioned earlier, Ringo has the speed to run with just about anyone down the field, being a track star himself in high school. However, he bites on the double move here with the stutter-and-go by Williams, losing just a step-in coverage which is all Young needs to drop it into the bucket for the score.

Overall, Kelee Ringo has all the physical qualities you look for in an outside boundary corner. He has the size, speed, and pedigree that fits the prototype at the position, being a capable press man cornerback that can reroute receivers as well as contest passes regularly in man-on-man situations. He is physical at the catch point and as a downhill player, bringing the want-to as a hitter both in run support as well as a blitzer off the edge. Still, Ringo needs to match his physical prowess with better mental processing standpoint, being able to react quicker to the receiver coming out of his breaks and rely less on guessing and using his athleticism to make up for any mishaps n coverage.

When watching Ringo, I see some similarities to former NFL CB and long-time Jacksonville Jaguar Rashean Mathis. Mathis enjoyed a productive NFL after being drafted in the second round in 2003 out of Bethune – Cookman College, being named a Pro Bowler and first team All-Pro in 2006. Mathis was a ballhawk, picking off 32 passes in his career as an opportunistic CB that had the size and length (6’1, 202lb) along with the athleticism much like Ringo to thrive on the outside. Mathis was also a willing tackler, having eight forced fumbles to his credit.

He will have to stay healthy and build off his impressive 2021 campaign to capture the status of CB1 next spring, but Ringo short be on the short list to be the top CB chosen in the 2023 NFL Draft. For Pittsburgh, they have several options at the CB position, but lack that true shutdown #1 CB on the roster, fielding several capable CB2s. With Sutton scheduled for free agency and Wallace and Witherspoon on short-term deals, the Steelers could elect to target Ringo should he be around their draft selection next spring.  Ultimately, Ringo is a talented player that Pittsburgh will almost certainly have interest in should he declare early should he refine the more technical aspects of his game in 2022.