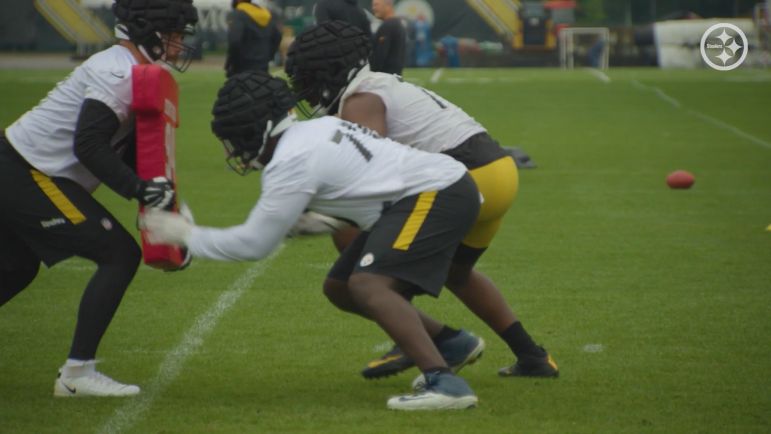 James Daniels: The crown jewel in the Steelers’ free agency plan, Daniels has Pro Bowl talent and is an immediate starter at right guard. He can also play center if necessary.

Mason Cole: Cole is hoping to have found his home now as the Steelers’ starting center, where he is most comfortable. He has had impediments to his opportunity to start in other cities, but is looking for stability to allow him to settle into his post.

Kevin Dotson: The third-year guard spent about half of the 2021 season on the Reserve/Injured List, and also dealt with injury at the start of training camp. He still has a lot to prove and is currently in competition for his starting job at left guard.

Kendrick Green: Last year’s third-round pick and a starter at center for most of last season, Green is now competing to start at left guard, but could wind up being a reserve.

J.C. Hassenauer: The Steelers’ number two center last season, Hassenauer is not guaranteed a roster spot, but could certainly earn one as one of likely two interior reserves. Kendrick Green is bound to be one of them, but Hassenauer is probably the favorite to be the ninth lineman.

John Leglue: Making his NFL debut last year with half a dozen starts at the end of last season at left guard, Leglue is hoping to retain a spot on the 53-man roster in a deep group.

Joe Haeg: Though focused primarily at tackle, Haeg can also act as interior depth and even as a spot starter if necessary.

Nate Gilliam: The Wake Forest product spent some time on the practice squad last year late in the season, and was retained on a Reserve/Future contract. He has a steep hill to climb.

Trent Scott: A veteran journeyman who has followed Pat Meyer, Scott provides both tackle and interior depth, but will likely focus on tackle, here.

Chris Owens: A college free agent rookie out of Alabama, Owens is a five-position player whom the Steelers have listed at center as a possible sign of their intention. He mostly started at tackle last year.

It seems that the Steelers have settled on Cole and Daniels being two of their three starters here, but the left guard spot is up for contention. Dotson should perhaps be regarded as the favorite to keep his job, but they haven’t given up on Green.

The depth is an interesting watch here, as well. Does Hassenauer keep his job? Can Leglue sneak his way onto the roster, thanks to his ability to play all five positions?