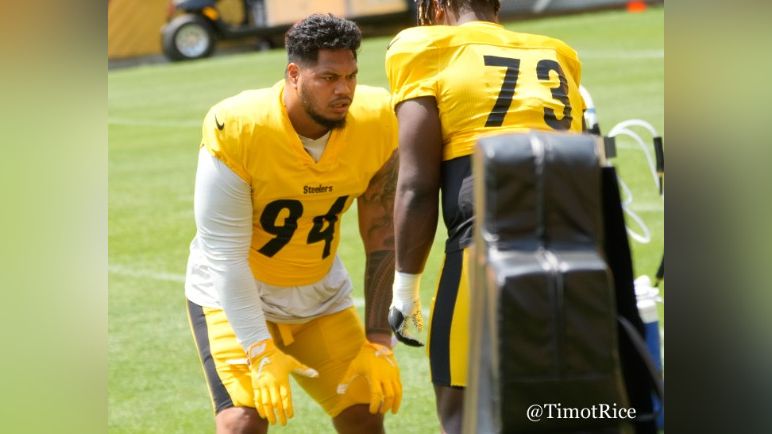 Tyson Alualu: Alualu returns after missing almost all of last season, suffering a fractured ankle early in the second game of last year. Having developed into one of the better run stoppers along a 3-4 interior, Alualu’s absence was deeply felt in 2021.

Montravius Adams: A former third-round draft pick who spent his rookie contract playing behind Kenny Clark, Adams found his way to Pittsburgh last year in a roundabout fashion, but was an immediate positive contributor, and he’s now hoping he’s found his home with the Steelers.

Carlos Davis: Now going into his third year, Davis’ body let him down last season, getting injured in the opener and then missing most of the year because of it. He spent a stretch on the Reserve/Injured List, but even when he returned, he didn’t play much.

Khalil Davis: Carlos’ brother, Khalil was signed to the practice squad during the season. Earlier in the year, they tried to claim him off waivers, but another team got him first. When he was released again, he cleared waivers altogether, and they signed him at a later date.

Donovan Jeter: A rookie college free agent out of Michigan, Jeter weighs in at 320 pounds at 6’3”. He has played the traditional run-stopping defensive tackle role throughout his stay with the Wolverines.

There are some unknowns here. What will a mid-30s Alualu look like coming back from injury? Can Adams be a quality rotational contributor the way he looked for much of his playing time with the Steelers last year?

We also need to figure out how Larry Ogunjobi fits into all of this, even though I didn’t include him in this section of the conversation. Could the Steelers ask him to play actual 3-4 nose tackle snaps? My guess is that in a base package, he would play at the end, leaving Alualu in the middle.

But it really depends upon how the roster shakes out. If they decide to part with Adams, it’s probably because they want Ogunjobi in that role. Meanwhile, the Davis brothers have one last chance to make a push and establish roles, or they’ll be seeing the practice squad more likely than not.