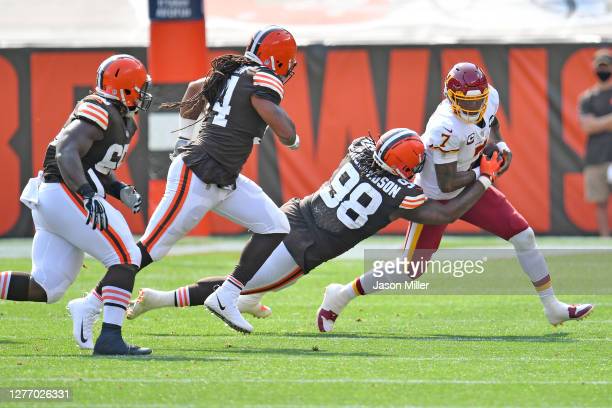 With Stephon Tuitt’s retirement, there’s been plenty of speculation of how the Pittsburgh Steelers fill that void. What outside free agent the team should go after. Frankly, I care about the internal guys a lot more. Moving on without Tuitt is a blow, no doubt, but there’s still talent in that room and one outside name isn’t going to dramatically change the picture anyway.

But if you ask me, and I’ve been messaged a dozen times about it already, who the team should consider, I’ll offer two names.

Kudos to Dave Bryan for suggesting this one. If that name sounds vaguely familiar, it should. Williams was drafted by the Steelers in the seventh round of the 2013 draft. He’s shown the most staying power of that class, and though his time in Pittsburgh was brief, his career was revived in Chicago and most recently, Detroit. In fact, he started all 17 games for the Lions last season, though he rotated along their defensive line, logging just 55% of the team’s snaps, while his production was mild, 27 tackles and a half-sack.

He just turned 32 and that makes him older than the types of free agents the Steelers normally sign, though we’re entering a new regime with Omar Khan and Andy Weidl. Williams would be a familiar face who can stuff the run and play 4i on run downs out of base packages. He should come on a minimum or near-minimum contract, something easily affordable for this team. If he doesn’t work out, there would be little to no dead money involved.

If you want more of a “name” option, look to Richardson. He’d be my personal choice. A former “pedigree” guy the Steelers have been so drawn to over the years, Richardson is a former first-round pick of the New York Jets. He’s played in different systems and has worked in a 3-4 scheme with experience moving up and down the line, doing so recently with the Browns and Vikings.

He can play end in the team’s three-down front and kick to three-tech in nickel and dime packages as a one-gap, upfield penetrator. He picked up 2.5 sacks for the Minnesota Vikings last season as part of their D-line rotation, playing under 60% of the defense’s total snaps. In 2020, he recorded 4.5 sacks, so there’s still some pass rush juice there.

Pittsburgh’s seen him in recent years with Richardson spending the 2019 and 2020 seasons with the Cleveland Browns.

Last year, Richardson signed a one-year, $3.6 million deal with the Vikings. Another year older and an early-June signing should put him right around $3 million this year, which Pittsburgh can certainly afford.

If you’re into dot-connecting, and we are, DL Coach Karl Dunbar coached Richardson with the Jets in 2013 and 2014.

But the bottom line is no matter who the Steelers bring in, they alone won’t replace Tuitt. This defense as a unit, especially the front-seven, must play better. No 30+ year-old journeyman in June is going to solve all the team’s woes or match Tuitt’s rare talent and athleticism. Pittsburgh must be more assignment-sound and technical than they were. Linebackers have to get off blocks, they must tackle better, and young guys have to take big jumps, maybe earlier than anticipated. That’s the way to get this defense back to being a respectable unit, not the hollow husk it was in 2021.