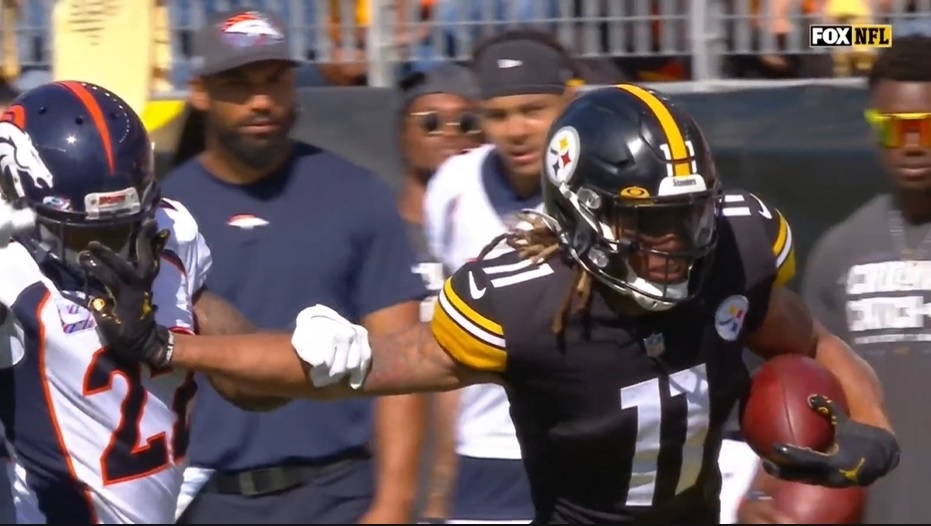 The Steelers have wrapped up their offseason organized team activities and will now head into mandatory minicamp.

Noteworthy though within the OTAs were comments made by Chase Claypool. Alex Kozora summarized Claypool’s comments of what he would like to improve upon this upcoming season. Claypool stated he wants to win the 50/50 balls. His belief in staying on his feet will help in doing so.

Let’s dive in to see how well Claypool has done so far in his career with contested targets and yards after the catch.

First off, Claypool’s career targets by route, including postseason, are sorted below to see how he’s performed to date. 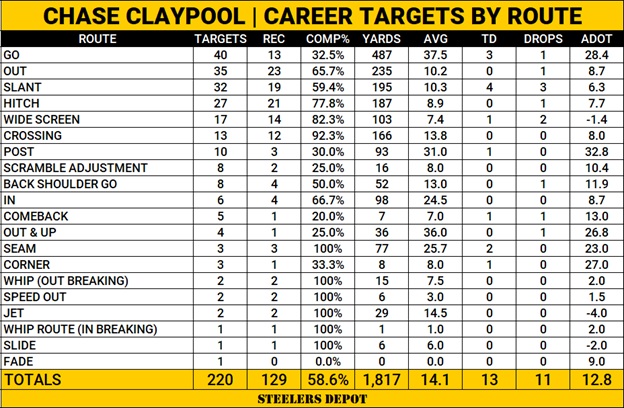 In addressing Claypool’s drop comments, there’s only two routes where he’s experienced multiple drops – Slant & Wide Screen. His career drop rate per PFF is 7.9% which ranks as the 32nd highest among 83 WR’s with a minimum 100 targets since the start of the 2020 season. The Slant and Wide Screens are typically quick throws and perhaps Claypool can improve on concentration at the snap to haul these targets in while decreasing the drops.

Digging into contested catches and YAC, each have been listed out below by targeted route. 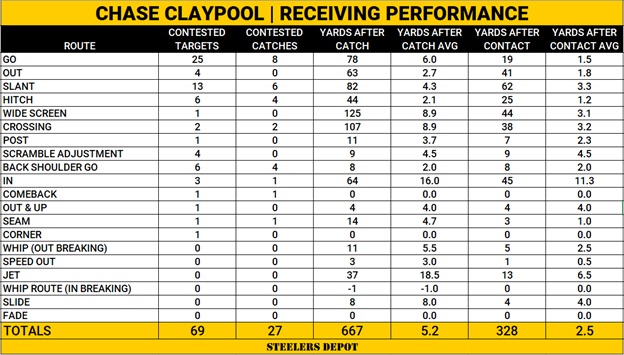 Of Claypool’s 220 career targets, 69 of them have been contested. His contested target rate is the sixth highest among those same 83 WR’s with a minimum 100 targets since the 2020 season. His 27 contested catches are the 11th most among the same group but his true contested catch rate of 39.1% ranks tied for 64th overall.

There’s some room for improvement on contested catches. If staying on his feet helps the situation, then his self-diagnosis could work wonders for him moving forward.

One last part to look at is YAC and yards after contact. Claypool is no doubt a physical specimen. There’s simply not many built like him currently in the league and his YAC average highlights how impressive he’s been so far.

Claypool averages 5.2 yards after the catch, which ranks 14th among the same group of 83 WR’s.  The telling number is there are only two wide receivers who have a higher ADOT than Claypool while also boasting a higher YAC average. Ja’Marr Chase averaged 7.8 yards after the catch with a 12.9 ADOT his rookie season. Marquez Valdes-Scantling with the Packers averaged 6.7 in YAC with a league leading 18.2 ADOT these past two seasons.

Yards after contact also highlights a strength for Claypool as well. His 2.5 average is sixth best since entering the league. Claypool’s top four targeted routes however (Go, Out, Slant and Hitch) in terms of YCO average all fall below is overall average except for Slants. This could simply be a product once again of not staying on his feet, especially with Go routes being downfield.

If Claypool holds true to his comments of wanting to both stay on his feet more and improve upon contested catches, his yards after the catch could also improve. Considering he’s already among the league’s best in YAC average and yards after contact average, it could result in a monster season for the third-year wide receiver.