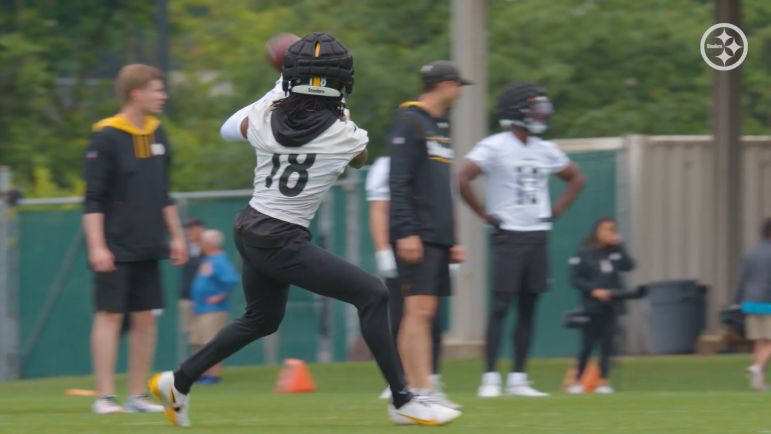 Just who is Diontae Johnson? Yes, he’s a talented wide receiver in the National Football League for the Pittsburgh Steelers. He had a Pro Bowl season in 2021, and is in line for a new contract within the next 12 months—but will he get it before or after March 2023? What is his value, and who is willing to pay it?

It’s all about perception, and let’s just say there is a lot of dissent when it comes to making the argument that the fourth-year veteran deserves to approach the top of the wide receiver market. Andrew Fillipponi and Chris Mueller recently brought on Steve Palazzolo of Pro Football Focus for their show in 93.7 The Fan to talk Steelers, and he was asked if Johnson is a top-20 wide receiver.

“Top 20 is a stretch, I would say, to put Diontae Johnson in there”, he said. “I mean, there’s a lot of good receivers. There’s probably 20 receivers in the NFL that you could say are legitimate ‘number ones’, whatever that description is, the go-to guy that can take over a game”.

It is true that we are in the age of the wide receiver. The prospects coming out of college are as good as they have ever been. They don’t all work out, but enough of them do where one seriously has to question if it’s worth paying a wide receiver huge money rather than drafting one or two.

Different teams have taken different approaches. We have seen a number of high-profile wide receivers traded, such as Davante Adams and Amari Cooper and A.J. Brown and Tyreek Hill, this offseason, with the trading team deciding they can be replaced, and the acquiring team deciding that they want the proven talent, and are willing to pay for it.

Now, again, where does Johnson fall? How close is he to the Coopers and Browns? There are now 11 wide receivers making $20 million per season or more, with a good chunk of those deals coming together this offseason—many already named, as well as Cooper Kupp most recently, among others. There are two more north of $19 million, and another two making $18 million per year.

Right now, Courtland Sutton and his range represents the tail end of the top 20, in terms of pay, and he’s making $15 million per season. Is Johnson in the Sutton, Allen Robinson, Adam Thielen range? And do the Steelers think that—and are they willing to pay that?

“I love Diontae Johnson. I think he’s a great route runner”, Palazzolo said. “But I like the concept of Diontae Johnson plus Chase Claypool, plus George Pickens, plus Calvin Austin. I like all of that. I don’t think Diontae Johnson is a top-20, take-over-a-game type of guy”.

The only wide receiver the Steelers have had in quite a while who you could truly say was ‘the’ guy is Antonio Brown. He is a guy who could single-handedly destroy a gameplan if you could get him the ball. Can Johnson be that guy? Have they had the quarterback play to be able to demonstrate that?

I’m just glad I don’t have to have the financial consequences of trying to answer these questions.