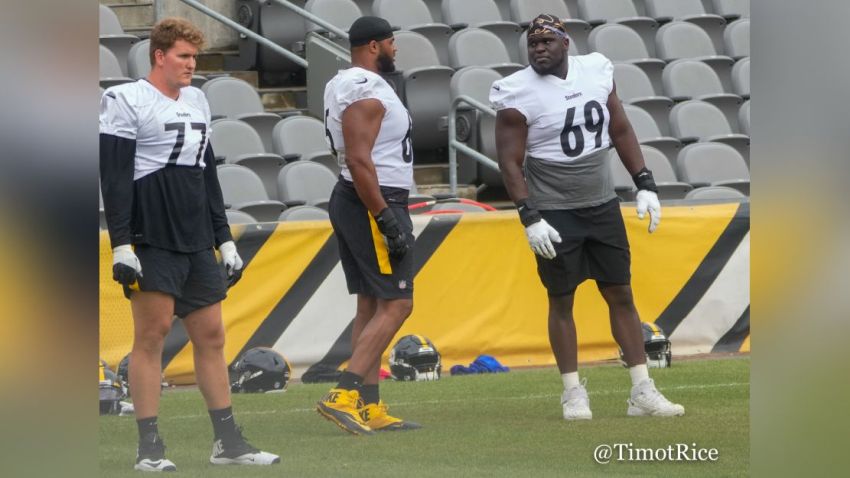 It’s no secret the Pittsburgh Steelers’ offensive line was well below-average in 2021. Kendrick Green, a guard for most of his college career, struggled as a rookie as Pittsburgh’s starting center, G Kevin Dotson got hurt and didn’t come back the same while G Trai Turner wasn’t all that impressive. The same can be said for OTs Dan Moore Jr. and Chukwuma Okorafor, although Moore improved throughout the course of the year and Okorafor was thrust out of his natural right tackle position right before the season started.

Pittsburgh’s front office set out this offseason to improve the offensive line and did so by bringing in both Mason Cole and James Daniels. Both Cole and Daniels are projected to start for Pittsburgh, and both bring a wealth of starting experience across the offensive line. Daniels started at three positions for Chicago while Cole can move around the interior of the line as well.

As a whole, Pittsburgh’s offensive line’s versatility could be a major factor for them this year. In addition to Cole and Daniels, reserve John Leglue has shown the ability to move around the line, while J.C. Hassenauer has started at both center and guard in his Pittsburgh tenure. Green, while he struggled last year, could see improvement if he’s moved back to his natural guard position and he’s expected to compete with Kevin Dotson for a starting job at guard. That’s not even counting undrafted free agent Chris Owens, who can play any position on the line.

There’s no guarantee that Owens cracks the opening 53-man roster, but the versatility as a whole is important. While the ideal scenario is the starting o-line gels quickly under new Offensive Line Coach Pat Meyer, the reality of the NFL is either someone is bound to struggle or injuries will occur. When that happens, Pittsburgh won’t necessarily have to resort to unproven practice squad call-ups to fill in on short notice. Pittsburgh has the backup tackle position figured out with veterans Trent Scott and Joe Haeg on the roster (although it might be unlikely both make the team out of preseason), and they now have a wealth of options at guard or center if someone goes down or struggles.

While it’s not all that sexy, having quality offensive line depth is important to building a winning team. You don’t want to put yourself in a position where one injury can doom your season, and Pittsburgh did a good job identifying players who have the versatility to move around and play different positions along the line.

On paper, the 2022 offensive line should be a lot better than it was in 2021, and if the Steelers’ season goes according to plan, the likes of Hassenauer and Leglue likely won’t have that big of an impact on the season. As we’ve seen in past years though, the odds of them playing and having some sort of role are pretty solid. I’m interested to see how and if the added depth and versatility will help the Steelers in 2022.