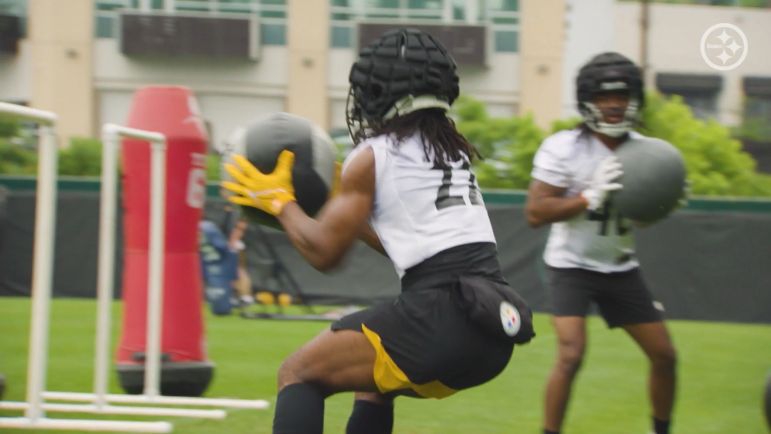 Ah, there’s nothing like a manufactured controversy. How much does Pittsburgh Steelers running back Najee Harris weigh? And when did he weigh it? There has been a bit of a kerfuffle lately in the Steel City, thanks in no small part to the Steelers’ absolute refusal to keep their website’s player vitals on their website updated. Now, player heights don’t vary much, but it shouldn’t be too hard to update weights.

Harris recently told reporters that he currently weighs 244 pounds. Some reporters took that and ran with it, using his listed weight of 232 pounds as an indication that he had put on some serious weight. But he quickly dispelled that by pointing out that he pretty much weighed the same last year.

“Reporters really don’t be knowing nothing just be tweeting shit”, he said in tweet responding to Dev Kleiman citing his listed weight when reporting that he is now 244 pounds.” Some reporters be straight cornballs”. Later, in a separate media session, he addressed it again. “Goddamn, y’all making it seem like I’m just fat as hell”, he said.

Apparently, not everybody in the media was thrilled about getting called out by the second-year running back, and have seemingly taken it as Harris being defensive, as though he perceived the media as attacking him. That’s how it was portrayed on The Poni and Mueller Show on 93.7 The Fan, With Arthur Moats agreeing.

“When I heard that about Najee, I’m like, ‘Listen now. They haven’t been mean to you just yet. You haven’t even had a bad game just yet. You are alright. If you think this is bad now, just wait, my friend’”, he said.

“Hopefully it never comes to that, but I would not call this quote-unquote ‘weightgate’, whatever we want to label this as, as the media getting on Najee. Hopefully he doesn’t experience it, but if you play this game long enough, you will. And that was not it”.

The thing is, was he really being defensive? Was it his fault that reporters erroneously assumed that he weighed 232 pounds last year and that he packed on a dozen pounds? Now, it’s also not the reporters’ fault that the Steelers don’t keep their vital stats correct. But anybody who has covered the team long enough should also know that those numbers are often not accurate.

What should have been done, of course, is that when he told reporters what he now weighs, he should have been asked what he weighed last year. But for whatever reason, we never got to that point. All we know is that Najee Harris is a well-built man, and that he can carry a football—and that he is probably going to put media members on the spot quite a bit throughout his career as they try to put him right back.