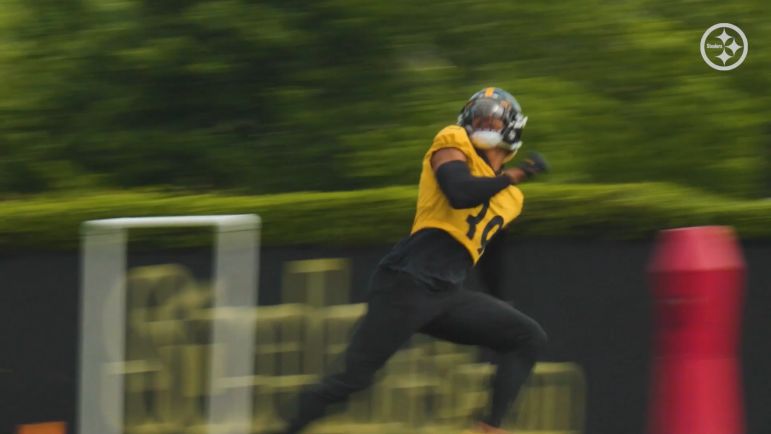 When talking about an athlete, there is no more transparent way of proving value than the proverbial putting your money where your mouth is—in other words, if you really think your player is the best at what he does in the league, and he’s due for a contract extension, you’d better pay him like it.

That’s what the Pittsburgh Steelers have done time and again with their great athletes. They did it just last year with T.J. Watt—still the highest-paid edge defender in NFL history, even if Aaron Donald eclipsed his mark for defenders overall (and all non-quarterbacks in general). This past week, they also made Minkah Fitzpatrick the highest-paid safety in NFL history with a new four-year contract extension valued at $18.4 million per year in new money. Is that important to players? You bet it is.

“Yeah, I think I’m the best at what I do, so, obviously, you would like to be paid in that way and represented in that way”, Fitzpatrick said during his press conference yesterday when speaking to the media following the signing of his new deal. “It could be a week from now or a year from now, somebody’s obviously going to pass it up, but you always want to raise the bar for the guys behind you”.

Fitzpatrick certainly raised the bar for the safeties who will get paid after him eclipsing the deal previously signed by Jamal Adams for $17.5 million. The next great safety due for a prime extension, with the accelerating cap space every year, may well hit the $20 million mark. But deals like Minkah’s are the steps along that path—not just for other safeties, but for all players, including his teammates.

“You want to raise the bar for the people in your own locker room”, he said. “I think Mr. Rooney and Omar [Khan] see the work that I put in and my play on the field reflects that. Knowing that they were willing to make me that, I’m appreciative”.

Acquired via trade in 2019 in exchange for a first-round draft pick, Fitzpatrick was a first-team All-Pro during his first two seasons with the Steelers. While he received no post-season accolades in 2021, his performance during the year was, frankly, underrated, and he was absolutely one of the top safeties in the entire NFL for the second half of the year when he was able to spend more time at free safety.

Now, the Steelers can’t pay everybody, of course, but it’s always good policy to pay your foundational stars. They have done that on defense with the recent deals for Watt, Fitzpatrick, and before them, Cameron Heyward, the trio combining for seven first-team All-Pro selections over the past three years (Heyward’s second-team nod in 2020 gives them eight All-Pro selections overall).

There isn’t a better defensive trio in the league than Heyward, Watt, and Fitzpatrick. The Steelers know this, and that’s why they have treated them accordingly when it comes to taking care of them on matters of contract status. Nobody can argue the Rooneys haven’t put their money where their mouth is here.