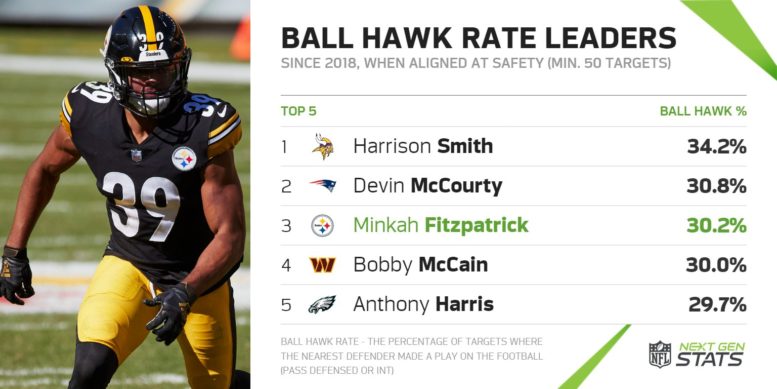 Pittsburgh Steelers safety Minkah Fitzpatrick has already established himself as being among the best at what he does. He’s got the recognition. Now he’s got the contract. He also has the stats to back them up—even if it’s always the tape that’s more important.

Still, the stats are nice to look at, and the good folks at ESPN provided us with a juicy one recently shortly after Fitzpatrick signed his new four-year contract extension that averages out at $18.4 million in new money per year.

In a revelation that will shock nobody, the two-time first-team All-Pro has been among the most disruptive safeties in the league—when he’s given a chance. According to ESPN’s Next Gen Stats, he owns the third-highest ball hawk rate since entering the NFL.

Since entering the NFL in 2018, Steelers Minkah Fitzpatrick ranks third among safeties (with at least 50 targets) in ball hawk rate (30.2%).

Ball Hawk Rate is a measure of how often a player disrupts a pass divided by targets as the nearest defender.

Defined by the percentage of targets that he is able to disrupt when he is the nearest defender, Fitzpatrick has a ball hawk rate of 30.2 percent, according to their metrics, which trails only the Minnesota Vikings’ Harrison Smith (34.2 percent) and the New England Patriots’ Devin McCourty (30.8 percent).

The Steelers free safety has recorded 13 interceptions during his four-year career, including 11 in 46 games since arriving in Pittsburgh. He also has 36 career passes defensed, 27 of which have come as a member of the Steelers’ secondary. His numbers were down last season, however, with only two interceptions and seven passes defensed.

Fitzpatrick intercepted five passes during his first season in Pittsburgh in 2019, which included a pick six. He also had nine passes defensed, in the process earning his first nod for the first-team All-Pro list. He repeated that feat in 2020 while recording four interceptions, among them another pick six (now with three in his career) and 11 passes defensed.

And he is still only 25 years old. He talked during his press conference after signing his new deal about how much he is still learning and growing, and how much better he still believes he wants to get, and how he is striving to get there.

Now, the Steelers know a little something about quality ball hawk safeties. Of course they had Troy Polamalu. They also had Donnie Shell, who finally got his due in recent years after being inducted into the Pro Football Hall of Fame. But we shouldn’t be forgetting Darren Perry, either, who somehow never made a Pro Bowl. Perhaps playing with Rod Woodson and Carnell Lake, he got overlooked.

But nobody can overlook Fitzpatrick. His stats are nice, like I said, but what he actually does on tape is where his real value lies. How he influences quarterbacks to not make throws, or to delay their throws—how he baits throws, and how he stops the run—are all crucial to the value he brings to the game.