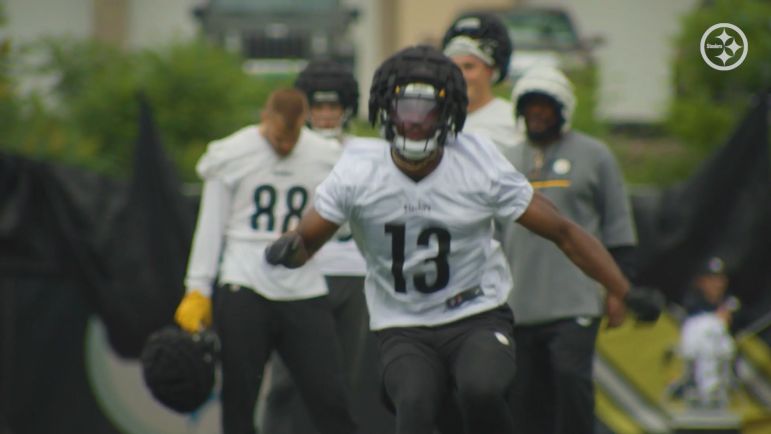 By necessity, the Pittsburgh Steelers have devoted a sizeable chunk of their offseason planning to thoughtfully rebuilding their wide receiver room. While they return their two leading receivers from last season in Diontae Johnson and Chase Claypool, the rest of the room may feature entirely players who never spent time on their 53-man roster before.

Rookie draft picks George Pickens and Calvin Austin III are safe bets to make the roster, and free-agent Gunner Olszewski, thanks to his return abilities, will likely be on the team, as well. But former Baltimore Raven Miles Boykin figures to have as good a chance as any in the room to claim a potential sixth and final roster spot in the position group.

Boykin recently joined Claypool and Minkah Fitzpatrick on the Varsity House podcast with Shaun Crawford to talk on a variety of subjects. At one point during the 90-minute discussion, Boykin spoke about his goals coming into Pittsburgh this year after being waived by the Ravens, and ultimately how the collective goal supersedes the individual.

“One, prove the type of player that I am, that I’m capable of being, that I have been”, he said when asked about his personal goals. “But no goal is above winning a Super Bowl, and that’s one of the great things I can say about leaving Baltimore and coming here, is that that’s just the standard”.

The remark is somewhat curiously worded unless one is to believe that Boykin’s experience in Baltimore convinced him that he was playing for a team for whom the goal of winning a Super Bowl was not ‘the standard’, which I do no, but nevertheless, now in Pittsburgh, he sees that it defines every decision in the building here.

“Playoffs is an expectation. It’s not like a goal. It’s the expectation here”, he said. “Winning a Super Bowl is the goal. That’s what we’re trying to reach, and that’s one thing I’m so fortunate for, because it’s not like that everywhere around the league. Some teams are happy to be in the playoffs, and it’s never been like that”.

“You make the playoffs in a place like Pittsburgh and you don’t go far, it’s like, ‘Okay, we need to get better’”, he continued. “It’s not, ‘We’re happy with what we got, let’s keep doing this’. It’s not like that everywhere around the league”.

Of course, Boykin has only ever been in Baltimore and Pittsburgh since being drafted out of Notre Dame in 2019, so he hasn’t necessarily lived the experience of many different organizations firsthand, but he no doubt knows people inside of every locker room from whom he has heard what is up in their neck of the woods.

Unfortunately, while the Steelers may have perpetually lofty ambitions, it has seldom brought them any closer to realizing them. Indeed, Pittsburgh has been held without a playoff victory for five straight seasons, last recording a postseason win in 2016 in the Divisional Round, ultimately losing to the New England Patriots in the conference finals.

Pittsburgh has at least qualified for the postseason in each of the past two years, but has lost in the Wild Card Round each time, and in embarrassing fashion, no less. Those who have been on those teams and return for this year have a bitter taste in their mouths they would love to get out. Boykin seems eager to share the burden providing the organization with a much-needed palate cleanser.