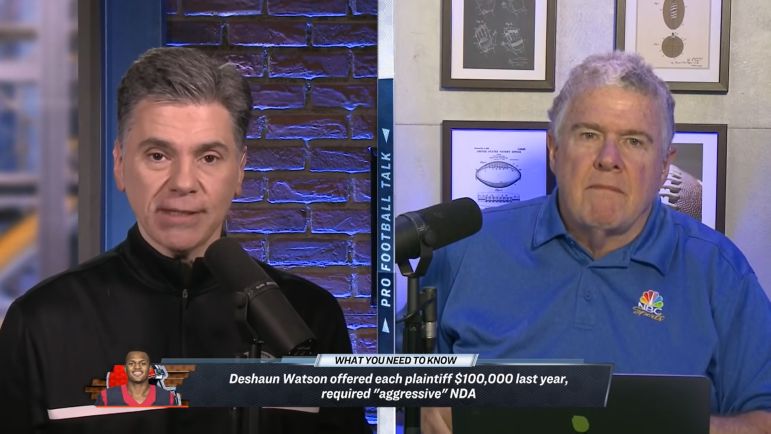 There is a level of difficulty in the avoidance of discussing such a topic as a franchise quarterback within the division who has a growing number of civil lawsuits filed against him charging varying levels of sexual misconduct that essentially rise to the level of rape in the worst of accusations (in non-legal terms, anyway).

I really didn’t expect to be writing this many articles about what we might as well call “the Deshaun Watson situation”, but here we are, monitoring new developments. With a 23rd plaintiff having already filed a new lawsuit and at least a 24th on the way, the biggest headline was the Cleveland Browns quarterback’s own lawyer making some questionable comments that could damage his defense.

It brought out the civil suit lawyer out in Mike Florio of Pro Football Talk, who weighed in a bit on some of the latest development, including the note in the 23rd lawsuit stating that all 22 prior plaintiffs had been offered a $100,000 settlement with a “very aggressive’ non-disclosure agreement during the 2021 season. Reportedly, 18 were willing to settle at the time—barring all of them settling, however, Watson walked away from any settlement. If he chooses to continue that path, he’s got a very long road ahead of him, Florio insists.

Given arrangements that would prevent lawsuits from being conducted in-season, Florio times the trials out as lasting well into 2024, meaning that the Browns will have to be dealing with this in some form or fashion, on its current trajectory, for the next three years.

And as he pointed out, it is still yet to be determined just what and how much one lawsuit will be able to extract from another lawsuit, introducing evidence from one trial into others. Each trial will be weighed by its own unique jury.

“Every one of these cases is a coinflip at best for Deshaun Watson”, Florio added. “Good luck flipping a coin 23 times and having it come up your way every time. Or either way. I doubt that he loses every one of these. But I would not bet that he’s going to win every one of them”.

The Browns organization presumably believes that it has done its due diligence and weighed all the risks, although there has been acknowledgement that nobody with the team has ever spoken to the accusers or their lawyer.

They have made their bed, in other words, and they had better get comfortable, because unless the course changes and they can find a way to settle all of the cases in a timely manner—or he starts to settle them piecemeal—this is going to drag out for a long time.