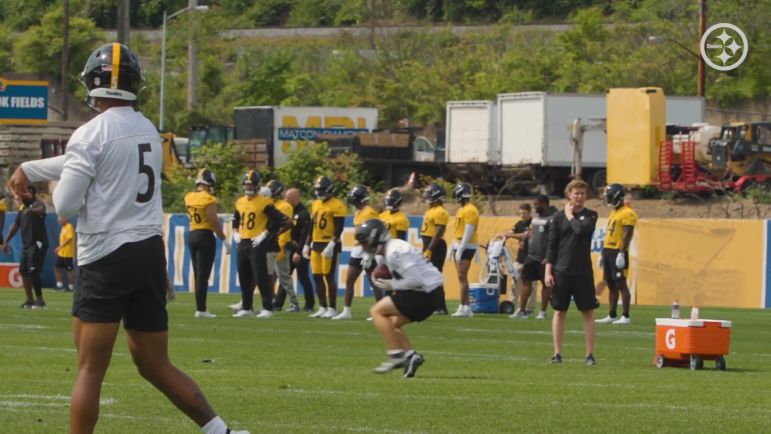 Half of the Pittsburgh Steelers’ quarterback room consists of rookies, and all but one of the passers on the roster are new to the team this year. The only veteran who has been through the system before is fifth-year Mason Rudolph, and he has played a key role as a result, helping to communicate the system to the newcomers—especially the rookies, first-round pick Kenny Pickett and seventh-rounder Chris Oladokun.

As he competes for a shot of starting at the beginning of the season and succeeding Ben Roethlisberger following the latter’s retirement, Rudolph is also making sure to pass along his knowledge to the newcomers—and not just because he sees some of the same qualities he had when he first came in.

“They’ve been good. Their heads spin a little bit, but they’ve got a lot of questions and they’ve picked things up quickly”, he said of the rookie quarterbacks, via 93.7 The Fan. “I remember being a rookie, and you see that hunger in both of them to want to learn and to stay later and ask questions, and whether they’re asking Mitch [Trubisky] and I or Coach [Mike] Sullivan], they’re hungry to learn”.

Trubisky is the veteran free agent that the Steelers signed on the first day of free agency, agreeing to terms on a two-year, $14.25 million contract that could rise to $27 million built around incentives that primarily consist of playing time escalators.

Rudolph, too, has incentives, largely driven by playing time, in his 2022 contract, the final year of his current deal, so there is also money on the line when it comes to this quarterback battle. But both Rudolph and Trubisky understand that the reason the Steelers drafted Kenny Pickett in the first round is because they believe, in the long term, he is going to be their starter. If he is not, then they made a horrible mistake.

Yet Rudolph doesn’t blink when any of the other quarterbacks, including Trubisky, ask him a question that he would be in the best position to answer, having gone through the offense in its many stages and varieties over the past five years.

“We’re all competitive, and everyone’s probably been in those situations”, he said. “I look back at high school, college, and pro. You’ve been in both boats, so you kind of understand the adversity there. But I think if guys have got questions, I’m not gonna shun anybody”.

As it currently stands, Rudolph is the only quarterback on the roster who is not under contract beyond this season. Since the draft, it has been discussed that the team could even put him on the trade block. But for now, he is operating under the belief that he is being given a fully legitimate chance to compete for the starting job, yet that won’t stop him from lending his knowledge where it is sought.