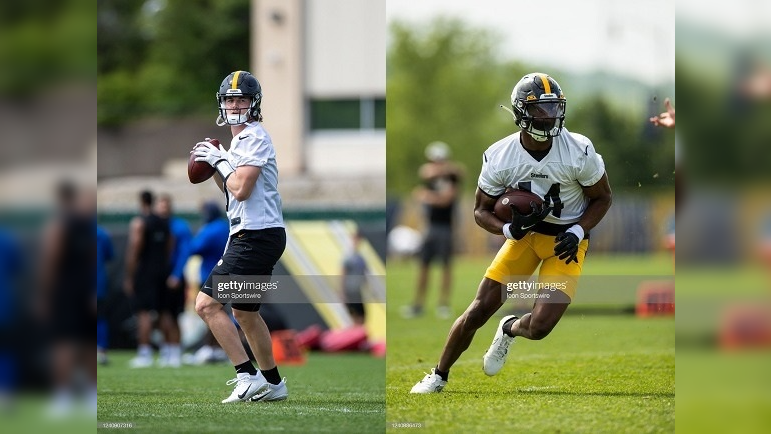 Reuter predicts that Pickett will eventually take over the starting job this season.  “Pickett was the third-string quarterback in OTAs and minicamp, playing behind veterans Mitchell Trubisky and Mason Rudolph . That could be a very temporary placement for the rookie, though. I suspect that Pickett — the only quarterback selected in the first two rounds of this year’s draft — will take over the starting job before too long in 2022, leaning on his experience and athleticism to garner all-rookie honors.”

As for Pickens, Reuter believes his hands and speed will make him a contributor. “In his final draft before retiring as the Steelers’ general manager, Kevin Colbert once again landed a bargain receiver in the second round. Pickens is already impressing, showing off his skills during OTAs. Expect whoever lines up at quarterback for Pittsburgh to regularly lean on his speed and strong hands to make big plays downfield.”

The two selections from Reuter don’t come as much of a surprise. Given where Pickett was drafted, the expectation is for him to be the best quarterback in the class. If he does win the job at some point during the season, the odds are he’ll likely perform better than someone like Desmond Ridder in Atlanta or Matt Corral in Carolina, the two other rookie quarterbacks most likely to see playing time this year.

The question really becomes if Pickett will see playing time this year, as the Steelers have the flexibility to use him as a backup and prepare him to be their 2023 starter. It would surprise me if Pickett is the starting quarterback Week 1 in Cincinnati, but it would be less surprising if he sees the field at some point later in the season for one reason or another.

Pickens is already the Steelers WR3 and should make an instant impact no matter who is under center. He offers the Steelers a true downfield threat, and his physicality and blocking will make him an asset in the run game, too. Obviously, Reuter isn’t putting him on his All-Rookie team for his blocking ability, but it’s a part of his game that deserves to be recognized.

I don’t think Pickens is going to have a Ja’Marr Chase or Justin Jefferson-esque rookie season, but 50+ receptions for over 500 yards is a realistic expectation that I think Pickens could very easily meet. If the Steelers get the production out of Pickens that they got out of Chase Claypool his rookie season, they’ll be very happy with his pick, and he’d probably end up on Reuter’s year-end All-Rookie team, as well.

The Steelers’ offensive rookies who didn’t make the list were QB Chris Oladokun (a lot would have to go wrong for him to see the field in the regular season this year), TE Connor Heyward (who will likely serve as a backup TE) and WR Calvin Austin III. The other receiver on Reuter’s list was Green Bay Packers WR Christian Watson, who, like Pickens, was a second-round pick. It’s reasonable to expect that both Pickens and Watson will outperform Austin III this year, but I think he’ll make a few big plays and show some big-play potential that the Steelers have been missing the last few seasons. I’m not expecting a ton out of him, but it wouldn’t at all be surprising if he has some impressive moments in 2022.

What do you guys think of Reuter’s selections? Do you think Pickett will play enough to justify being the quarterback selected? Let us know in the comments.