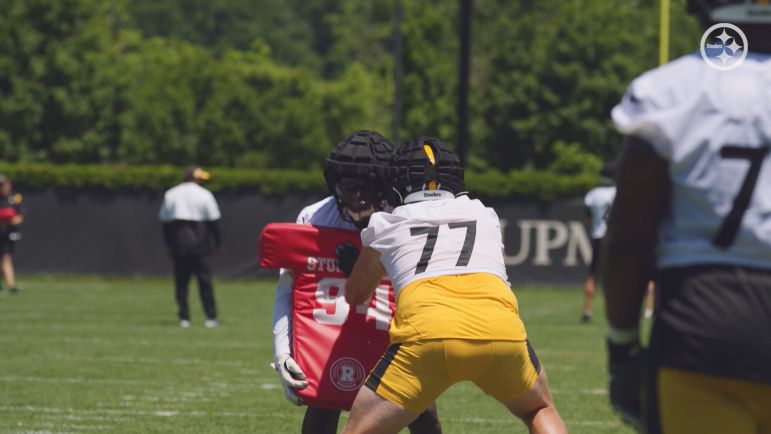 The offensive line was a major concern for the Pittsburgh Steelers last season. It’s not at all clear that it won’t be this year, as well, but at least they managed to add some new starters via free agency in James Daniels and Mason Cole, who are expected to step in at right guard and center, respectively.

Yet there’s no guaranteed roster spot for the last man who started at left guard for the Steelers, John Leglue, a journeyman former college free agent who spent most of the 2021 season on the practice squad before being called up due to injury, and then being forced into the starting lineup.

Kevin Dotson started the first nine games of last season at left guard. While B.J. Finney is now retired, J.C. Hassenauer returns, and the Steelers are also now working 2021 starting center Kendrick Green at guard as well. So where does that leave Leglue, who can play all five positions?

“The more you can do — I believe that”, he told reporters back during OTAs, via Chris Adamski of the Pittsburgh Tribune-Review. “I am just trying to do everything I can. The coaches always tell us, ‘Just control your own work. That’s all we can ask for’”.

A Tulane graduate, Leglue was first signed by the Denver Broncos in 2019, then spent most of that season on the New Orleans Saints’ practice squad. He finished the year on the practice squad of the Green Bay Packers, where he remained until final cuts in 2020.

He remained unemployed for most of that season until the Steelers signed him to their practice squad on December 29, and he has been fairly consistently employed in Pittsburgh since then. He began the 2021 season on the practice squad, but was called up at the end of November.

After Dotson was injured for the season, Hassenauer filled in and then got hurt, then Finney right behind him. Leglue had to step in, logging 95 percent of the snaps after Finney’s early-game injury against the Baltimore Ravens in Week 13, and then played for the rest of the season, including the playoffs, essentially playing seven full games.

But will he be on the 53-man roster come September, even with his position versatility? Green and Hassenauer lead the way for interior reserves, with Joe Haeg returning as the primary swing tackle. The Steelers also brought in Trent Scott, who has played a lot of football for Pat Meyer, their new offensive line coach.

Leglue may be looking at 10th-man status right now, which means back to the practice squad, assuming that he isn’t claimed off of waivers. But he will be given an opportunity this summer to retain his roster spot. Chances are that’s going to include him getting long looks at tackle as well, given how big of a sticking point is his versatility.