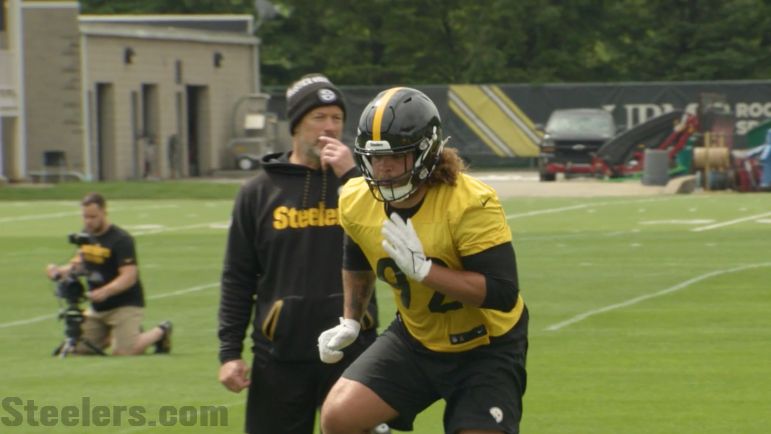 While Stephon Tuitt’s decision to retire certainly did not come as a surprise, it ultimately leaves behind ramifications for the Pittsburgh Steelers moving forward, particularly across their defensive line. Now, they should certainly be in a better position without him than they were a year ago.

One of the reasons could be because of Isaiahh Loudermilk, who is now going into his second season after gaining hundreds of snaps’ worth of trial-by-fire, on-the-job training a year ago. He has put on some pounds and has been preparing to step up into a larger role this season, regardless of the circumstances.

“I’ve been preparing the same all throughout the offseason, and it’s still the same for me”, he told reporters yesterday, when he was asked if he felt that he was in for a bigger role after Tuitt’s retirement. “I’m still gonna go about my business the same, whether there is that open spot there or not. Nothing really changed for me, I’m still doing the best I can every day. I’m still working with the guys here. For whatever role I’m thrown into, I’m gonna be ready for”.

A fifth-round pick out of Wisconsin, Loudermilk was going to have to earn a roster spot to begin with, and was likely going to be in for a season of inactivity if not for the injuries that came up, not only to Tuitt, who missed the entire year, but also Tyson Alualu, who went down in week two.

He went on to play over 300 snaps defensively overall, including the postseason, missing one game due to injury (and one game as a healthy scratch to begin the season), but also having the opportunity to make two starts due to injury. He produced 23 tackles, a sack, and three batted passes, potentially showing a knack for getting his arms up in the throwing lanes.

While he’ll not likely be called upon to be the full-time starter in Tuitt’s stead—for now, Chris Wormley should be firmly expected to continue in that role as he did last year—he could be a steady rotational presence this year, along with Montravius Adams. The team will likely be looking for ways to get rookie DeMarvin Leal on the field, as well, though it would take dressing six linemen if both Loudermilk and Adams dress.

It took much of the season, truth be told, before Loudermilk really began to look more comfortable on the field. He found himself on the ground a fair bit during the early portions of the season, but he gradually turned things around, and put some good tape out there by the end of the year.