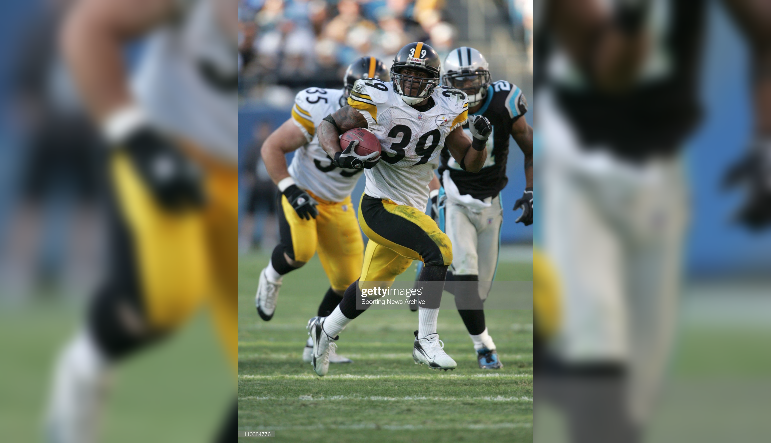 Sometimes, two teams in the NFL are so far apart in talent level that blowouts transpire and the game looks easy for one side, while appearing foreign for the other.

That was the case on December 17, 2006 in Charlotte, North Carolina in a nonconference matchup between the Pittsburgh Steelers — one year removed from the Super Bowl XL title — and the moribund Carolina Panthers at Bank of America Stadium.

That afternoon, in what was the third-to-last game of Bill Cowher’s career as head coach of the Steelers, saw Pittsburgh cruise to a 37-3 win in completely dominant fashion thanks to a great rushing attack, some big special teams plays, and a punishing defense that recorded five sacks on the afternoon.

In the 2006 win over the Panthers, running back Willie Parker and rookie wide receiver Santonio Holmes had days to remember, leading to the 34-point win that kept the Steelers’ slim playoff hopes alive at that point at 7-7 on the year, which was the same year in which Ben Roethlisberger was seriously injured in a motorcycle crash.

Against the Panthers, the Steelers really didn’t need much from their third-year sensation at quarterback as the Steelers ran for 148 yards and two touchdowns in the win, leading on Parker to do the heavy lifting on the ground.

That’s exactly what the Super Bowl XL hero did, rushing for 132 yards and a score on 23 carries, using his speed to run the Panthers’ defense all over the field behind a strong offensive line led by future Hall of Fame guard Alan Faneca.

Early on in the mid-December matchup, the Steelers and Panthers couldn’t quite get anything going. Pittsburgh went three-and-out twice to start the game, thanks to two third-down sacks of Roethlisberger. Carolina was able to muster a bit of a drive on its second possession, but a 50-yard missed field goal by John Kasay kept things squared at 0-0.

Pittsburgh went three-and-out for a third straight time, but the Steelers’ defense came up big, forcing a quick three-and out, allowing the Steelers’ offense to find its footing and put together a scoring drive.

Parker sandwiched runs of 6 and 9 yards around a 9-yard completion from Roethlisberger to Hines Ward, sparking the Steelers’ offense on the ground.

Look at the blocking up front and the movement from left tackle Marvel Smith and left guard Alan Faneca, and the vision by Parker to cut that toss back inside and pick up 9 yards inside Carolina territory. That run really sparked the Steelers on the ground, leading to a huge day from the former undrafted free agent.

With Parker rolling on the ground, the Steelers were able to get something going through the air. Roethlisberger found Ward again for 8 yards, drew a pass interference penalty on Carolina’s Richard Marshall for 14 yards on a throw intended for Santonio Holmes, and then found backup running back Najeh Davenport on a well-time screen for 18 yards down to the Carolina 1 yard line as the first quarter expired.

On the first play of the second quarter the Steelers took the lead for the first time in the game, which ended up being for good.

Faking the handoff to Parker behind Faneca on the goal line, Roethlisberger had fullback Dan Kreider leaking up as a passing option, but the Carolina defender covered Kreider up, leading a ton of grass for Roethlisberger to chew up with his legs, resulting in a 1-yard touchdown and a 7-0 Steelers’ lead that they’d never relinquish.

Roethlisberger sure had a knack of capping off drives with his legs like this during his heyday.

Following the touchdown, the Panthers came back offensively and started to drive the football as quarterback Chris Weinke found some success through the air, finding Steve Smith for 19 yards and Drew Carter for 15 yards, but a sack by James Farrior and two false start penalties doomed the drive, resulting in a punt.

The Steelers took over from there.

Parker ripped off runs of 21 and 11 yards on the first two plays of the drive, before offensive coordinator Ken Whisenhunt dialed up some trickeration using a wide receiver to throw the football again.

This time, it was Cedrick Wilson throwing the football to Ward, and man did Wilson put some mustard on the 21-yard completion.

That’s a frozen rope from Wilson to Ward, and it’s right on the money between the numbers between three defenders. What a dart. What a call.

Eight plays later on a third and 8 from the Panthers’ 8, Roethlisberger found Holmes for what was called a touchdown on the field, thanks to great second-chance effort from the rookie first-round pick. Instead, Carolina challenged, and after review Holmes was ruled down at the 1, forcing the Steelers to settle for a 19-yard field goal from Reed for a 10-0 lead with 4:29 left in the second quarter.

Steelers’ defensive end Brett Keisel then aided another quick Panthers’ three-and-out with a sack of Weinke on third down, setting up a blocked punt by James Harrison, who knifed in for the block on punter Jason Baker, giving the Steelers the football at the Panthers’ 10 yard line.

Two plays later, Roethlisberger dropped a perfectly-timed screen pass to Davenport, who did the rest following the dynamic duo of Faneca and right guard Kendall Simmons into the end zone from 13 yards out, making it 17-0 with two minutes left in the half.

Carolina responded well in the hurry-up offense as Weinke found Steve Smith for 18 yards, Keyshawn Johnson for 16 yards and Michael Gaines for 19 yards before Kasey kicked a 37-yard field goal to close the half at 17-3 Steelers.

Coming out of the break, the Steelers’ defense stayed relatively hot, in terms of getting after Weinke, as Aaron Smith sacked the former Heisman Trophy winning quarterback to force a punt opening up the second half.

The Steelers then went on a long drive to put points on the board. Roethlisberger found Holmes for 10 yards, tight end Heath Miller for 20 yards, and Ward for 21 yards, eventually setting up a 45-yard field goal from Reed for a 20-3 lead with 4:45 left in the third quarter.

Carolina quickly went three-and-out again, leading to the final nail in the coffin from the Steelers. Roethlisberger found Nate Washington for 14 yards before Parker took over, picking up a yard, 3 yards and 6 yards on consecutive carries before dropping off a 41-yard touchdown down the left sideline against the overmatched Panthers’ defense, making it 27-3 Steelers with 20 seconds left in the third quarter.

Pittsburgh wasn’t quite done though. With a 27-3 lead in hand, the Steelers defense again forced a quick three-and-out, causing Carolina to punt the football away. Disaster seemingly struck for the Steelers though as Holmes muffed the punt, leading to a Panthers’ recovery. A well-timed flag though for an illegal player out of bounds wiped out the play though, setting up a replayed down.

Holmes didn’t mess up this time, catching the Baker punt cleanly and racing 65 yards through the heart of the Panthers’ coverage unit for the punt return for touchdown, making it 34-3 with 14:44 left in the fourth quarter, putting the game out of reach for good.

For good measure, the Steelers picked off Weinke once as rookie safety Anthony Smith made a great play over the middle before showboating on the return, earning a hard lecture from Bill Cowher and defensive assistant Lou Spanos. Late in the game, the Steelers’ vaunted defense kept the Panthers out of the end zone as Ike Taylor picked off backup Carolina quarterback Brett Basanez in the end zone, sealing the 37-3 win following a 26-yard field goal by Reed.

The Steelers’ defense held Carolina to just 240 yards of offense as Weinke finished 18-for-28 for 170 yards and an interception while being sacked five times. Brett Keisel led the Steelers with 1.5 sacks in the win, while James Farrior, Larry Foote, and Aaron Smith added one sack each. Clark Haggans recorded half a sack with Keisel.

Pittsburgh ultimately finished 8-8 that season, losing to the Baltimore Ravens the following week, 31-7, causing hem to miss the playoffs in Cowher’s final season, as the future Hall of Famer retired after the year, leading to the hiring of Mike Tomlin and the transition into a new era that remains today.