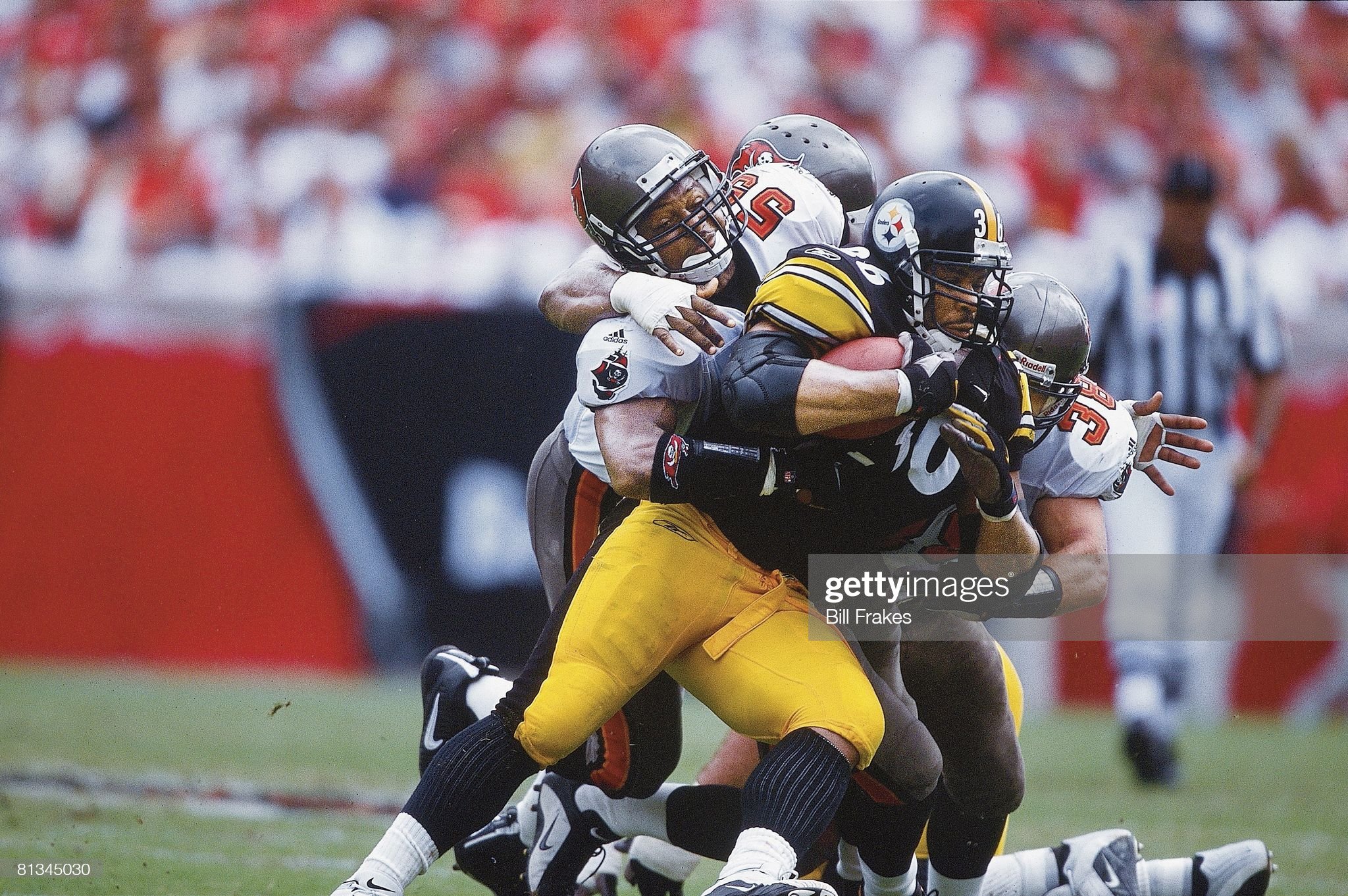 On a hot, humid day in Tampa Bay on October 21, 2001, the Pittsburgh Steelers — wearing their black uniforms on the road — provided their own heat against the Tampa Bay Buccaneers thanks to superb individual performances on both sides of the football from future Hall of Fame running back Jerome Bettis and All-Pro pass rusher Joey Porter.

Despite the close 17-10 final score, the game wasn’t nearly as close as the final line as Bettis rumbled through the Buccaneers’ defense featuring Hall of Famers Warren Sapp, Derrick Brooks and John Lynch at all three levels, while Porter and the rest of the Steelers’ defense abused the Buccaneers’ porous offensive line, sacking quarterback Brad Johnson 10 times in the seven-point win.

After a Pittsburgh punt on the second possession of the game, the Buccaneers found their footing offensively, marching to the Steelers’ 14 yard line in 13 plays before DeShea Townsend sacked Johnson on 3rd and Goal, forcing the Buccaneers to settle for a 31-yard field goal from Martin Gramatica just under five minutes into the second quarter, taking a 3-0 lead.

That drive woke the Steelers up though on the hot, humid day in Tampa Bay as Pittsburgh went 80 yards in eight plays. Stewart found wide receiver Troy Edwards for 16 yards, and Hines Ward for 22 yards before Bettis, on a halfback option pass, found little-used tight end Jermane Tuman from 32 yards out for the go-ahead score with 6:16 left in the second quarter.

Fantastic design here by the Steelers. You can see Tuman on the move out of the bunch formation, selling that he’s the lead blocker on the toss play before slipping free behind the Tampa Bay secondary for the big touchdown on the gadget play. That throw by Bettis also happened to be the first touchdown of the year that he had a hand in, which was rather remarkable, considering it was already Week 5.

With that touchdown pass in his back pocket, Bettis really started to heat up, especially in the second half.

Coming out of the locker room with a 7-3 lead, the Steelers started to lean on Bettis, allowing the Buss to roll right downhill against Tampa Bay’s overmatched defense on the ground. It also helped that the Steelers’ defense continued to get heat on Johnson, with Porter recording his second sack of the afternoon, combining with Kimo von Oelhoffen to drag Johnson to the turf.

On Pittsburgh’s first possession of the second half after the sack by Porter and von Oelhoffen, the Steelers went right to work offensively. Three plays into the drive, Bettis shook loose against the Buccaneers’ defense, rumbling 46 yards to pay dirt for the 14-3 lead on the road.

It is truly remarkable watching old clips like this, considering the size Bettis was at the time (258 pounds). At that size, there’s no way he should have been outrunning Hall of Famers like Derrick Brooks and Ronde Barber, but that’s exactly what he did.

What a physical specimen in his own right, and how cool is it seeing Bill Cowher with that trademark chin in this clip? Good times had by all.

With the 14-3 lead, the Steelers continued to get after Johnson and the Buccaneers offensively, forcing a quick punt on the ensuing possession.

Back on the field after giving up a long touchdown to Bettis, the Buccaneers’ defense didn’t have an answer for the Hall of Famer once again. Bettis rumbled for 15 yards off right tackle to start the drive, thanks in part to a tremendous block on the perimeter by Ward against Lynch.

Three plays later, following a 13-yard strike from Stewart to Plaxico Burress, Bettis again gashed the Buccaneers’ defense, ripping off a 29-yard run to set up a 35-yard field goal by Kris Brown, extending the Steelers’ lead to 17-3.

Tampa Bay just genuinely had no answer for him, and Bettis knew it. Watch the head shake he gives the Tampa Bay sideline following yet another explosive run. That’s a thing of beauty right there; that’s Bettis.

With the two-score lead in their advantage, the Steelers’ defense turned up the heat in remarkable fashion down the stretch.

On a 4th and 5 late in the third quarter, reserve safety Mike Logan broke in free on a safety blitz and sacked Johnson for the turnover on downs. A quick turnover by the Steelers on another Stewart interception to Barber gave the Buccaneers the ball back, but three player later, there was Porter again, sacking Johnson.

Nobody could block him consistently in his prime due to his combination of speed and power. He absolutely whooped the Buccaneers’ tight end inside on the pass rush, again serving a reminder that he should never be blocked by a tight end.

Two plays after his sack, Dwayne Washington sacked Johnson for a loss of 11, before Logan picked off Johnson in the end zone on a throw intended for star receiver Keyshawn Johnson, keeping Tampa Bay off the board.

The two teams then traded quick three-and-outs before the Steelers again leaned on Bettis and reserve running back Amos Zereoue on the ground. Bettis ripped off a 13-yard run and Zereoue added an 11-yard run, but with 4:25 left in the fourth quarter Zereoue fumbled the football away, giving Tampa Bay life.

Porter seemingly put a stop to that though, sacking Johnson twice in five plays for a combined loss of 29 yards, giving him a career-high four sacks on the afternoon.

Despite his dominant performance late in the fourth quarter, the Buccaneers were able to scratch across the goal line late as Johnson found Frank Murphy from 5 yards out for the score with 37 seconds left, making it a 17-10 game. It was too little, too late though as the Steelers kneeled the ball after an onside kick recovery by tight end Mark Bruener, sealing the 17-10 win to improve to 4-1.

In the win over Tampa Bay, Bettis rushed 17 times for 143 yards and a score, adding the 32-yard touchdown pass in the process. Stewart threw for 100 yards and rushed for 32 yards but had the two interceptions, while Ward hauled in three receptions for 44 yards, and Burress added three catches for 26 yards.

Defensively, Porter recorded the four sacks, von Oelhoffen added three sacks, while Logan, Townsend and Washington added one each as the Steelers sacked Johnson 10 times. Washington also recorded a team-high 11 tackles in the win. For the Buccaneers, Johnson threw for 283 yards and one touchdown, along with the one interception, while Keyshawn Johnson added 10 catches for 159 yards.

That season, the Steelers went on to reach the 2001 AFC Championship Game, which they hosted at Heinz Field. Of course, Tom Brady, Drew Bledsoe and the New England Patriots put an end to a special run that saw the Steelers go 13-3, win the AFC Central and defeat the Baltimore Ravens 27-10 in the Divisional Round.

Thanks in part to his big day in Tampa Bay, Bettis rushed for 1,072 yards and four touchdowns in 2001 earning a Pro Bowl berth, while Porter finished with 9.0 sacks that season.