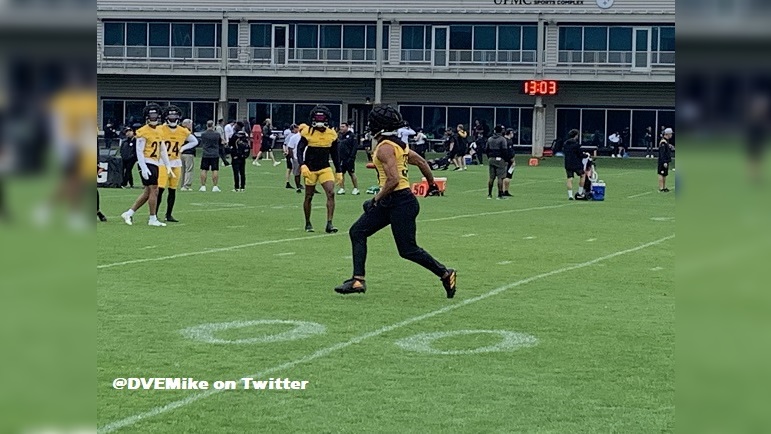 With the Pittsburgh Steelers now having one mandatory minicamp practice in the books for 2022, it certainly does seem like the team is heading for at least holdin this summer.

According to Joe Rutter of the Pittsburgh Tribune-Review on Twitter on Tuesday, Steelers safety Minkah Fitzpatrick, who is seeking new contract this summer, was an on-field bystander during team portion of practice earlier in the day. That news doesn’t come as a big surprise, however, and especially on the heels of Steelers outside linebacker T.J. Watt essentially doing the same thing last summer before ultimately signing a four-year contract extension that resulted in him becoming the NFL’s highest paid defensive player at the time.

Minkah Fitzpatrick breaks on the ball during position drills. pic.twitter.com/Vc8eqAAuq8

After the Steelers Tuesday mandatory minicamp practice concluded, head coach Mike Tomlin was asked about Fitzpatrick and if he has a plan established for the All-Pro safety on the heels of it looking like he only participated in individual drills earlier in the afternoon.

Tomlin’s comments came after Fitzpatrick reportedly said earlier in the day that he wasn’t prepared to talk to the media just yet.

We’ll obviously wait and see what transpires with Fitzpatrick’s level of practice participation on Wednesday and Thursday. That said, don’t be surprised if he continues to not participate in the team portion of practice. If indeed that’s the case be prepared for Fitzpatrick to mimic what Watt did last summer until he signs a contract extension.

While there was a report back in April from Aditi Kinkhabwala, who was with the NFL Network at the time, that the Steelers were “very, very close” to getting a deal done with Fitzpatrick, that now looks to be very spotty reporting on her part. In fact, and based on Steelers’ history, it would have been a huge surprise had the team signed Fitzpatrick to a very lucrative contract extension that early in the offseason.

On Tuesday, Kinkhabwala was an in-studio guest on 93.7 The Fan and she seemed to really backpedal away from her earlier thinking that the Steelers will get Fitzpatrick signed to an extension before the team reports to Saint Vincent College in Latrobe. That’s par for the course for her, however, when it comes her history and reporting style.

Unless you have been ignoring the Fitzpatrick contract situation all offseason, he’s likely looking to become the NFL’s highest paid safety before Week 1 of the regular season. Such a goal, assuming he accomplishes it, would likely result in him signing a four-year extension that includes a new money average of around $18 million and a total value of a little more than $82 million as he has old money due him in the amount of $10.612 million, a result of the Steelers picking up the fifth-year option on his rookie contract a little more than a year ago.

So, what is the next line in the sand when it comes to Fitzpatrick this summer? Well, Wednesday’s and Thursday’s practice participation levels are obviously next. Past that, the start of training camp will be the next notable date when it comes to him. Will he speak to the media before then? We’ll have to wait and see, but it sure doesn’t sound like he will and especially if he’s started a summer holdin, which it looks like he has as of Tuesday.