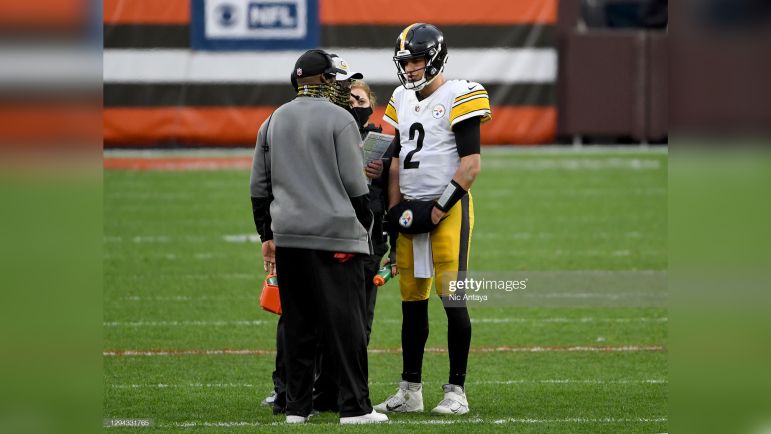 Fifth-year Pittsburgh Steelers’ quarterback Mason Rudolph’s time in the Steel City could be quickly coming to an end.

That shouldn’t be a surprise, considering the work the Steelers put in at the quarterback position in the offseason, signing veteran free agent Mitch Trubisky just hours into the legal tampering window, and then drafting Pittsburgh Panthers star Kenny Pickett in the first round at No. 20 overall, not to mention adding Chris Oladokun in the seventh round.

A long-time backup with the Steelers, Rudolph has served his purpose, but unless he miraculously wins the starting job in training camp, he’ll be spending the 2022 season elsewhere, that much is almost certain.

According to Pittsburgh Post-Gazette Steelers’ beat writer Ray Fittipaldo, the Steelers are probably hoping to get a fifth-round pick in any trade for Rudolph at this time. Of course, that asking price could change throughout training camp, depending on the health and development of quarterbacks across the league.

Steelers insider @rayfitt1 on @937theFan says the Steelers are waiting for a team to offer them a 5th round pick for Mason Rudolph.

Do you think one will?

Appearing on 93.7 The Fan’s PM Show with hosts Andrew Fillipponi and Chris Mueller, Fittipaldo explained the Steelers’ stance on Rudolph.

“They’re probably waiting for a fifth,” Fittipaldo said, according to audio via 93.7 The Fan. “But I think if the middle of August, end of August rolls around and they’re not getting those types of offers I think they would be more than happy to get a sixth round pick for him. I think Mason has done enough in his NFL career that some other NFL team, once their is an injury and that’s a big if.

“But once there’s an injury I think he’s going to be attractive as a second or third team quarterback for another franchise,” Fittipaldo added. “Then of course it’s what can you get for him? Is it a fifth, is it a sixth, is it a seventh, you know we’ll have to wait and see what the circumstances are for that other team but I don’t necessarily think Mason needs to have a great camp or a great preseason game to make that happen.”

That seems to be a fair asking price — for now — regarding Rudolph, who has started 10 games in the NFL and sports a 5-4-1 record overall. He’s not going to move the needle much in the quarterback market overall, but for a team looking for depth and wanting overall experience brought to the position, even as a backup, it’s hard to ignore Rudolph’s credentials in that area.

Of course, things could certainly change coming training camp, should Rudolph look good overall and really make the Steelers look hard at him for the starting job. That doesn’t sound like it’s truly going to be the case for Rudolph though, according to Fittipaldo, who stated that the Steelers are liking to give him a week or two to see what he has before really focusing on Trubisky and Pickett.

With the writing on the wall, as Fittipaldo believes, we’ll see when — or if — the Steelers make the move at quarterback and trade Rudolph for a draft pick. Currently, Pittsburgh doesn’t have a 2023 fifth-round pick. That pick was traded to the Seattle Seahawks last summer for cornerback Ahkello Witherspoon. Being able to recoup that pick would do wonders for the Steelers on Day 3.

However, it wouldn’t be surprising to see the Steelers get a fourth at this point, considering Joshua Dobbs fetched a fifth-rounder from the Jacksonville Jaguars a few years ago. Rudolph is a better quarterback overall with more experience. We’ll see what new Steelers’ GM Omar Khan can shake loose from another team for the former third-round draft pick.