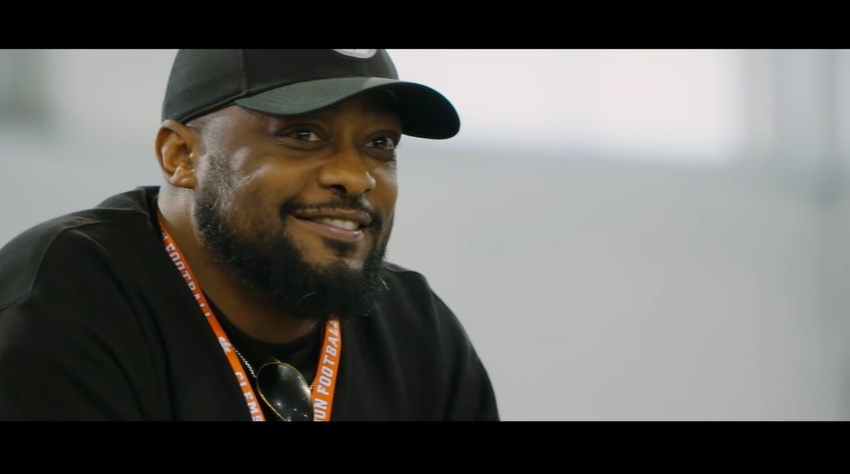 Like all coaches in today’s NFL, the game of football has a deep, rich tradition in the blood of one Mike Tomlin.

From early in his childhood to his collegiate career at the College of William and Mary, football was all Tomlin would eat, sleep and breathe. Stepping onto the field as a wide receiver for the Tribe from 1992-95, all Tomlin wanted to be was great. He came close to achieving that in 1994, earning Second Team All-Yankee Conference accolades as a receiver, but in the end he fell short of being great as a player, which ultimately sent him into his life’s work of coaching.

Tomlin spent one season each coaching at Virginia Military Institute in 1995 and Memphis in 1996 before latching on with Arkansas State in 1997 and 1998 as a wide receivers coach and then defensive backs coach. From the, Tomlin went on to Cincinnati, where he coached at the collegiate level for two seasons as defensive backs coach, before getting his start in the NFL with the Tampa Bay Buccaneers under Hall of Famer Tony Dungy.

Four years later, Tomlin was in Minnesota as the Vikings’ defensive coordinator for the 2006 season, before then becoming the Steelers’ head coach in 2007, where he remains today.

Appearing on The Pivot Tuesday with hosts Fred Taylor, Ryan Clark and Channing Crowder, Tomlin talked about what motivates him as a coach, and it wasn’t very surprising coming from a former player, that motivation being the failures as a player he experienced.

“What inspires me as a coach really, to be blunt, are my failures as a player. I could never live with,” Tomlin said to Taylor, Clark and Crowder, according to video via The Pivot Podcast’s official YouTube page. “I wanted to be a great player, man. And I wasn’t. And I never got over that and I take that same energy into coaching, seriously. I think that’s why we all coach, man. We don’t want to admit it, but we coach because we cannot play. We could never play or we could no longer play or we couldn’t play to our vision.”

That truly isn’t a surprise from Tomlin. He was a very serious player while at William and Mary, one that wanted to reach the NFL, even if it was a long shot. While he never did make it to the league as a player, he threw himself into coaching with the same dedication and preparation he showed as a player, which ultimately led him to the highest of mountaintops in the coaching profession.

The same dedication and preparation will lead him into the hallowed halls of the Pro Football Hall of Fame in Canton one day after he calls it a career, too.

Even while chasing that greatness he could never touch as a player, Tomlin doesn’t find the motivation in things that others may, whether it’s the Lombardi Trophy, the personal accolades, or even the large check that gets written out to him each season. Instead, it’s the men he works with inside the walls of the facility each and every day, aiming to help them reach greater heights in their careers, being that pillar like Tony Dungy once was for him.

“The men I work with, man. Coaching is real simple to me, man. You help players realize their dreams. You help them feed their families and then in turn you eat,” Tomlin said to Taylor, Clark and Crowder, according to video via The Pivot Podcast’s official YouTube page. “And so how do I stay motivated, man? Them men I’m working with change every year and, and there’s extreme urgency in the playing game, and I just think we do a disrespect to the dudes that play when we, as coaches, don’t share that same urgency man.

“Like when I came into it, Tony [Dungy] hired me at 28. I had John Lynch, Ronde Barber, Brian Kelly, Dexter Jackson, dudes like that in my meeting room. And I was the same age as those guys. Lynch was nine months older than me,” Tomlin added. “And so I did not wanna let them dudes down. The whole nature of our relationship was my ability to help them dudes prepare and bring that daily. You know what I’m saying?  And I understood that I had no resume that they could appreciate, you know what I’m saying? I had no reputation that they could appreciate.”

That same mentality, even with the resume and reputation he carries today, leads Tomlin each and every season on and off the field. There’s a genuine enthusiasm and appreciation for the game that he gets to work in, and the job he gets to hold down each and every day. That rubs off on those around him in the coaching room, down to the players, locker room attendants, and more. It’s infectious, and why the Steelers have had so much success under Tomlin in his 15 years at the helm.

Hopefully that infectious attitude and overall motivation continues for another 15 years. He’s grossly underrated within the city, but properly respected outside of the fanbase. An elite coach with an elite mindset, one that players want to play for.