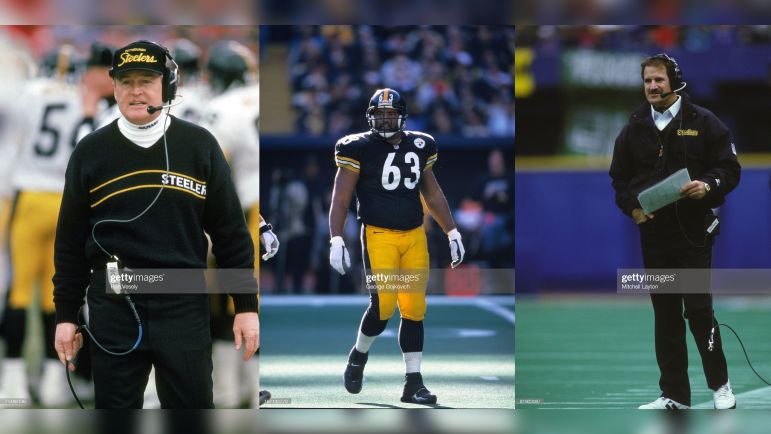 The professional career of Dermontti Dawson was a remarkable one for a number of reasons. It was, after all, excellent, among the best ever, as attested to by his bust in Canton. He revolutionized his position even though he never played it before entering the NFL. But one thing he personally reflects on is the fact that he had the opportunity to play under not one, but two Hall of Fame head coaches in Chuck Noll and then, for the majority of his career, Bill Cowher.

“That’s the ultimate award for us, being inducted into the Pro Football Hall of Fame. And being coached by two Hall of Fame coaches, I don’t think a whole lot of guys have had that happen before”, he recently told Stan Savran during a sit-down interview for the Steelers’ website. “But it was great to see Coach Cowher go into the Hall of Fame”.

There were some stylistic differences between the two, certainly. They weren’t just from different eras, but of course he also played for them at very different stages of both their careers and their lives. Noll was in his late 50s and had already been a head coach for a couple of decades when Dawson was drafted. Cowher was in his first head coaching gig in his mid-30s.

“Coach Noll had been coaching for many years, and so he was on his way out and towards retirement”, Dawson reflected. “Then Coach Cowher hadn’t been too far parted from playing and coaching. He was more enthusiastic, and Chuck Noll would just let the assistant coaches do their thing and make the adjustments for us”.

He talked about how Cowher was getting involved in drills, with plenty of high fives and chest bumps all around, somebody whose energy you fed off of—dare I say, a ‘player’s coach’. But Noll was never that guy even in his earlier era. He was an authoritarian and disciplinarian.

The two used different methods, but both produced results. That’s why they are alongside Dawson, whom one drafted and the other developed into an elite player, in the Pro Football Hall of Fame. It’s a legacy few have the opportunity to boast of.

Now, they didn’t accomplish all of their goals together. Noll’s championships came a decade and more before Dawson ever stepped foot on an NFL field. Cowher won his Super Bowl at the end of his own tenure, five years after his center retired, a man who was so good that Cowher felt the need to go out and replace him with another very good center in Jeff Hartings via free agency.

Even that is a testament to Dawson’s legacy. Dawson followed Mike Webster, and was followed by Hartings. We’re not going to talk about Maurkice Pouncey’s successor, though. We’re going to be nice today, right guys?