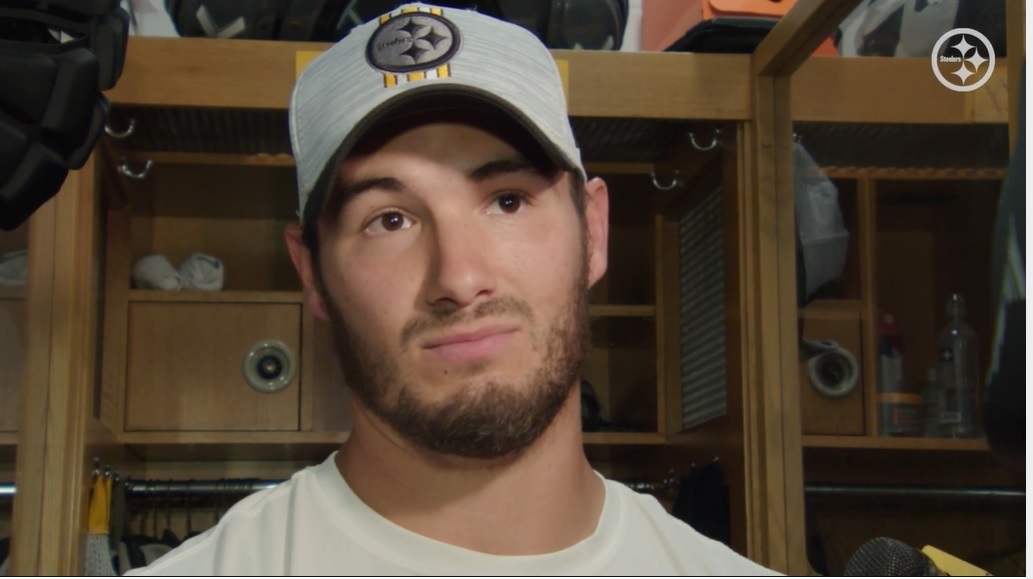 After signing a two-year, $14.285 million contract back in March that includes not-likely-to-be-earned incentives, should new Pittsburgh Steelers quarterback Mitch Trubisky be considered the team’s most overvalued player entering the 2022 season? In a Wednesday post by Jeff Kerr of CBS Sports, he indicated that should indeed be the case when it comes to the former first round draft pick of the Chicago Bears.

Why did Kerr choose Trubisky as the Steelers’ most overvalued player? Well, you can read some his reasoning below.

“Of the 47 quarterbacks with more than 500 pass attempts over the four years Trubisky started (2017-2020), he ranked 31st in passer rating (87.2), 26th in completion percentage (64%), 29th in touchdown percentage (4.1), and 37th in yards per attempt (6.73). Not exactly numbers beaming with confidence, but Trubisky appeared resurrected as a backup quarterback in Buffalo, learning new aspects of the game under Brian Daboll and the Bills’ offensive coaching staff.”

Kerr also added the below snippet.

“For a team that always has playoff aspirations and exceeds expectations, are the Steelers really going to trust Trubisky to run this offense? Training camp will be very interesting if Trubisky is the No. 1 quarterback.”

As we sit here in late June, it seems like forgone conclusion that Trubisky, who barely played any snaps in 2021 as a member of the Buffalo Bills, will be the Steelers’ Week 1 starter for the team’s road game against the Cincinnati Bengals. If the offseason OTA and mandatory minicamp first-hand media reports are correct, rookie quarterback Kenny Pickett, the team’s first-round selection in the 2022 NFL Draft, served mainly as the third-stringer in most of the practices. That means that veteran Mason Rudolph was the No. 2 behind Trubisky for most of the spring.

While there is still training camp to go, it’s very plausible at this point that Pickett could enter the 2022 regular season as the Steelers’ third-string quarterback behind both Trubisky and Rudolph. The team, however, could decide to trade Rudolph for whatever they can get for him just prior to the season starting, especially if Pickett has a respectable showing during training camp and the preseason.

Back to Trubisky. It’s not like the Steelers spent a lot of money on the North Carolina product earlier in the offseason. Additionally, at the time the Steelers decided to sign Trubisky, there wasn’t a guarantee that the team would ultimately be able to draft Pickett. In fact, the Steelers brass seemed legitimately surprised that Pickett fell to the team in the first round of the 2022 NFL Draft.

Sure, Trubisky has his warts, and the jury will certainly be out on him until he gets a few games with the Steelers under his belt. Even so, it seemed like a forgone conclusion that the Steelers would have some sort of bridge quarterback in 2022 ahead of them drafting one. While I’m not a huge Trubisky guy overall, the Steelers signing him this offseason made a lot of sense. For all practical purposes, Trubisky signed a one-year, $6.285 million contract barring him hitting any of his included not-likely-to-be-earned incentives. How can he or that deal be considered overvalued?

Personally, I think Kerr made an awful choice when it comes to Trubisky and even if the quarterback washes out by midway through the 2022 season. Quite honesty, it’s hard to tab any player currently on the Steelers’ 90-man roster as being overvalued. If I were pushed to choose one, however, it might be tackle Chukwuma Okorafor. It certainly wouldn’t be Trubisky.

What say yinz? Is Trubisky really the most overvalued player on the Steelers roster as we sit here in late June?