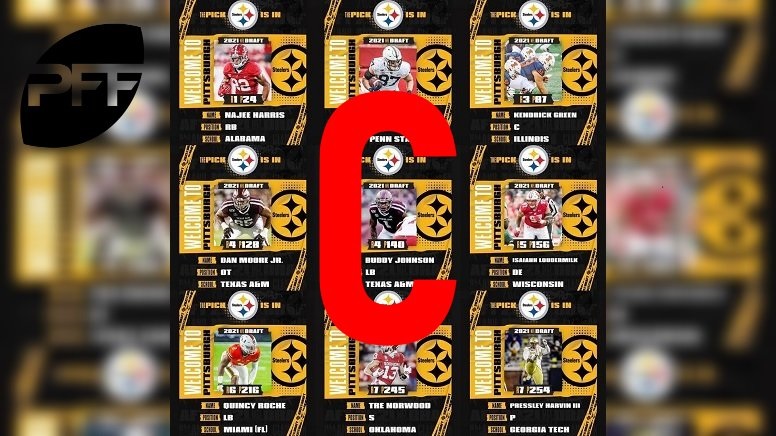 It’s right around that time in the offseason where it’s appropriate to look back on how the 2021 NFL Draft classes stacked up to each other. The Pittsburgh Steelers’ 2021 Draft class was initially given a “C” grade by PFF. On Wednesday, PFF’s Michael Renner regraded all the draft classes, and in his eyes, that grade did not change more than a year after all nine players the Steelers selected began their NFL careers.

“The Steelers’ 2021 draft class hasn’t had any major duds as of yet, but it also hasn’t really had any needle-movers,” writes Renner. “Najee Harris and Pat Freiermuth may have tallied impressive yardage totals in 2021, but that’s because they were both high-usage players. Harris averaged only 3.9 yards per carry, while Freiermuth managed 8.2 yards per reception.”

While it is fair to see how Renner came to this conclusion, it’s also important to question whether or not his logic makes sense. Sure, Harris and Freiermuth are the premier players out of the class, as they should be with them being first- and second-rounds picks, respectively. But his reasoning for giving the class a lower grade overall seems like it has a lot to do with him believing those two just were just a product of playing a ton of snaps versus their actual positive impact on the offense.

Harris ran for 1,200 yards behind an offensive line that was never anything more than mediocre in all 17 regular season games. Oftentimes, he had to fight off defenders in the backfield before even thinking about moving upfield. The offensive line additions of James Daniels and Mason Cole this offseason should hopefully make Harris’ job easier and allow him to improve on his 3.9 yards per carry. As for Freiermuth, there’s no doubt that he could have been utilized more within the Steelers’ offense. But here again, looking at his yards per reception may be deceiving. The aforementioned offensive line mixed with a 39-year-old quarterback probably hindered some of Freiermuth’s ability to make plays down the field like he showed in his years at Penn State.

As for the rest of the class, the Steelers did draft three other players in Kendrick Green, Dan Moore Jr. and Pressley Harvin III who started the vast majority of games last season. Out of that group, Moore seems the most likely to retain his starting spot at left tackle. And while Green and Harvin will both have every opportunity to improve and start again in 2022, it won’t come easy as both will face competition throughout the offseason.

Sixth-round pick Quincy Roche is now with the New York Giants after not making the Steelers’ initial 53-man roster last season. Fourth-round pick Buddy Johnson dressed for just four games in 2021. But, fifth-round pick Isaiahh Loudermilk and seventh-round choice Tre Norwood, who started three games, played more than expected. While Loudermilk was thrown into the fire and struggled at times, Norwood was a pleasant surprise in a secondary that was forced to heavily step up and stop the run. He had 38 total tackles and an interception in 17 games.

While Renner’s grade is clearly focused on just one season, it’s definitely reasonable to conclude that the “C” grade might be just a tad low. As of now, at least three viable starters for the foreseeable future in Harris, Freiermuth and Moore and the possibility of a few more becoming quality starters is far from a class that should be scoffed at. Only time will tell whether the Steelers’ 2021 class deserves anything more than an average grade from Renner and others.