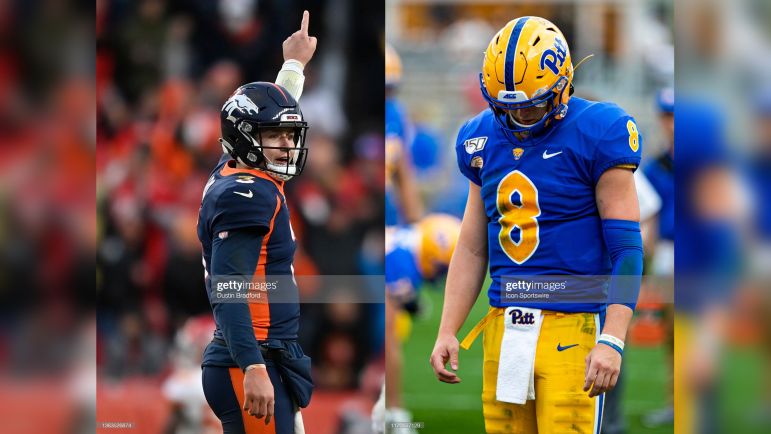 You can only take away so much in terms of objectivity credibility when you have a matter of a coach speaking about his own player, especially when there are circumstances involved in that coach wanting to talk up said player. In other words, take what Seattle Seahawks head coach Pete Carroll had to say about the quarterback he got on the back end of a deal that sent Russell Wilson to the Denver Broncos.

Still, it speaks to the general perception of this year’s draft class. The Seahawks were expected to be one of the teams most likely to draft a quarterback this year after trading their Super Bowl champion, but they passed on the opportunity, yet it hasn’t stopped the questions.

In addition to him saying that he doesn’t anticipate the team will trade for a quarterback—likely in direct reference to Baker Mayfield—Carroll talked up Drew Lock, the former second-round pick Seattle got back in that Wilson trade.

In other words, Carroll is saying that Lock was and is a better prospect than any of the quarterbacks who came out of college this year—though, to that point, only one of this year’s quarterbacks was drafted earlier than where Lock was when he came out, and that would be the Pittsburgh Steelers’ Kenny Pickett, at 20.

Pickett going at 20 was the latest that a quarterback had been the first to come off the board in many years, and you’d have to go back to the 1990s to find the last draft class in which only one quarterback was drafted in the first two rounds, as was the case this year, with Malik Willis, Matt Corral, Desmond Ridder, and eventually Sam Howell all having to sit and wait quite a bit.

“The first look at Drew, he’s really athletic, he’s really a confident athlete, you can see he’s got a lot of body control, he’s got quick feet, he’s got a quick arm, he’s got various ways he can release the football as his body’s in different positions”, Carroll said of his presumed starter.

The Seahawks also have Geno Smith, another former second-round draft pick, who was Wilson’s backup a year ago. Jacob Eason is their number three quarterback, a former fourth-round draft pick by the Indianapolis Colts in 2020.

So how much truth is there in what Carroll has to say—not objectively, but in terms of what he truly believes? Does the organization really have that much faith in Lock? Are they waiting for the Cleveland Browns to give up on Mayfield and either release him or make him very affordable to acquire? We have a long history of coaches, general managers, and owners directly contradicting their publicly-stated intentions of acquiring or not acquiring players, after all.