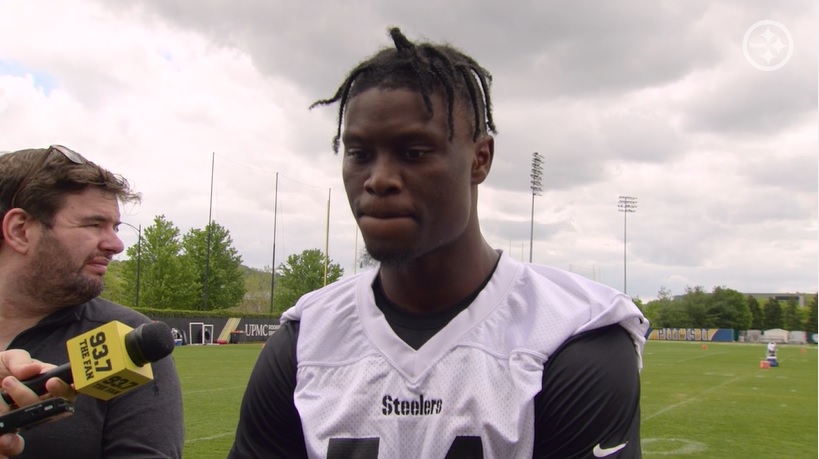 For all the character concerns and maturity issues that seemingly followed new Pittsburgh Steelers’ wide receiver George Pickens throughout the pre-draft process, the rookie wide receiver appears to have the right mentality following his first official minicamp practice as a Steeler Friday morning at the South Side Facility.

Pickens, selected No. 52 overall out of Georgia, isn’t worried about the outside noise or attempting to prove himself to anyone. Instead, he’s focused on letting his work ethic on the field do the talking, stating to reporters Friday that he’s focused on putting his head down, going to work, and being as versatile as possible for the Steelers moving forward.

“I’m just focused on doing what I’ve been doing my whole career, and that’s just putting my head down and going to work,” Pickens said to reporters, according to video via Steelers.com. “That’s probably going to put you in the best position to succeed.”

Along with putting his head down and going to work on the field and in the playbook, Pickens is aiming to be that versatile piece for the Steelers, doing whatever is asked of him, whether that’s playing the Z role in the offense, or in the slot. He even mentioned special teams as well, though that’s a stretch to think the Steelers would ask a potential starting wide receiver like Pickens to do anything on special teams, especially if he’s not returning kicks.

“That’s kind of my mindset, personally,” Pickens said regarding being versatile and lining up anywhere the Steelers ask. “Just me being versatile, just me playing on special teams, doing whatever I need to do, just putting my head down and work.”

Steelers 2nd-rd pick a George Pickens on UGA running a pro-style offense, his bond with fellow rookie WR Calvin Austin and on a head accessory he wore on the 1st day of rookie minicamp pic.twitter.com/94QPu1MBaO

Coming out of Georgia, Pickens certainly has the versatility at receiver, having spent time as an X, Z and slot receiver at Georgia. While he’s not as quick-twitch or shifty overall as guys like Diontae Johnson and fellow rookie Calvin Austin III, he has been able to handle the slot role during his collegiate career and could provide the Steelers some snaps there in 2022 and beyond.

His role overall though appears destined as that big-bodied Z receiver that can stretch the field vertically and make plays downfield, something Chase Claypool was asked to do in 2021 but struggled mightily at.