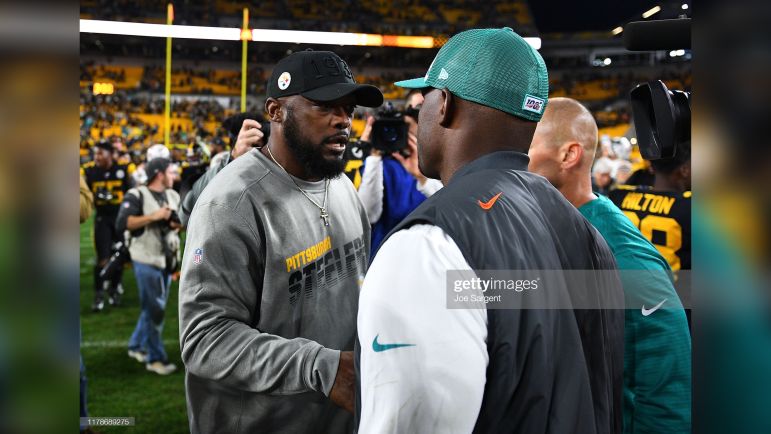 While the Pittsburgh Steelers were more active than usual this offseason in their roster-building methods, arguably one of their most significant decisions was to hire former Miami Dolphins head coach Brian Flores as an assistant after he was let go following the 2021 season.

Flores, who is of course currently suing the NFL as well as several teams, believes that he has had his opportunities around the league suffer as a result of the lawsuit, which in and of itself has become a part of the lawsuit. While he was passed over for head-coaching positions, it was Steelers head coach Mike Tomlin who offered him to come on board.

The subject has been talked about a number of times already this offseason, but Tomlin seemed to discuss it with a bit more candor while appearing on the Bleav in Steelers show recently with Mark Bergin and one of his own former players, Ike Taylor. Asked why he decided to give Flores the opportunity after he struggled to find another job after Miami, he was pretty forthright about it serving multiple purposes.

“Because I’m in position to do so, and that makes me smile”, he said when asked why. “You work your tail off over the course of your career to be in position to do good when given an opportunity, and that, quite frankly, just seemed too much like ‘right’ for me”.

Tomlin is, of course, a 15-year veteran head coach, the longest-tenured head coach in the NFL behind only Bill Belichick of the New England Patriots, in one of the most stable organizations in all of American professional sports. He knows he would have the structural support behind this decision. But it was also, be believes, a wise football decision.

“Now, aside from the ‘good’ component of it and providing a lifeline for someone that’s deserving, man, I got a really good football coach”, he said. “A guy that I believe is one of the best 32 in the world in this business. And I got this guy here as an assistant football coach. It’s incredible”.

Flores was a very respected assistant who cut his teeth under Belichick for many, many years, and even has a scouting background deep within his resume. He had a three-year tenure with the Dolphins, which was tumultuous, but which most believe outperformed its modest expectations.

His firing was a surprise for most, and it was largely expected that he would quickly find another head-coaching job. He was purportedly close once or twice, including in Houston, where longtime Patriots personnel man Nick Caserio is now general manager—Flores argues his lawsuit is why he didn’t get that job.

But regardless of what jobs he didn’t get, he now has one in Pittsburgh. The question is how long he’ll hold it. Will it just be a one-year gap before he lands another head-coaching job? For selfish reasons, I hope it’s at least two years, because a coach must be on the staff for two years in order to qualify for compensation under the revised Rooney Rule.