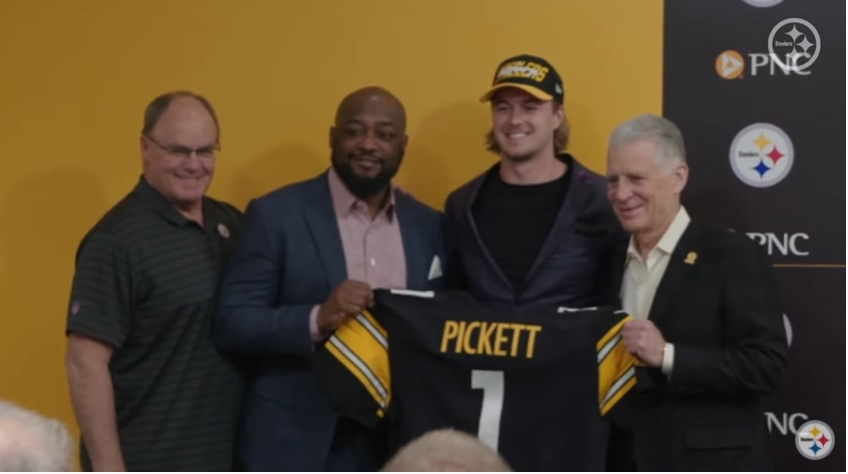 The offseason has brought about great change to a number of teams across the NFL at the two most important positions in the sport: quarterback and head coach.

For the Pittsburgh Steelers, they already have the head coaching position right with Mike Tomlin, but there’s a ton of optimism and overall hope that the franchise got the quarterback position right post-Ben Roethlisberger with the selection of Kenny Pickett in the first round of the 2022 NFL Draft.

CBS Sports seems to think the Steelers may have gotten it right too, ranking the pairing of Pickett and Tomlin at No. 8 overall in its top 16 new QB/Head Coach duos rankings by Cody Benjamin.

Though Pickett is a curious choice for the initial rankings and not Mitch Trubiksy, the duo of Pickett and Tomlin edges out the likes of Trey Lance and Kyle Shanahan in San Francisco, Tua Tagovailoa and Mike McDaniel in Miami, and Daniel Jones and Brian Daboll in New York, to name a few.

“The Steelers have been perennial contenders for the duration of Ben Roethlisberger’s career. Their quarterback since 2004, Big Ben retired this offseason after never finishing a season with a losing record,” Benjamin writes. “Now, Pittsburgh needs to sustain that success with a combination of Mitchell Trubisky and Kenny Pickett at quarterback. Either player will massively change the offense that had the fastest average time to throw in 2021.”

Adding Tomlin into the fold certainly helps the Steelers’ rankings in Benjamin’s piece though, as Tomlin is one of the most stable head coaches in the NFL, having spent the last 15 seasons with the Steelers with no true end in sight. He’s going to be the one true constant for the Steelers’ organization moving forward, and rightfully so.

How well the duo of Tomlin and Pickett does on the field remains to be seen, but hopes are high.

Elsewhere in the AFC North, the duo of quarterback Deshaun Watson and head coach Kevin Stefanski in Cleveland was ranked No. 3 overall in Benjamin’s list.