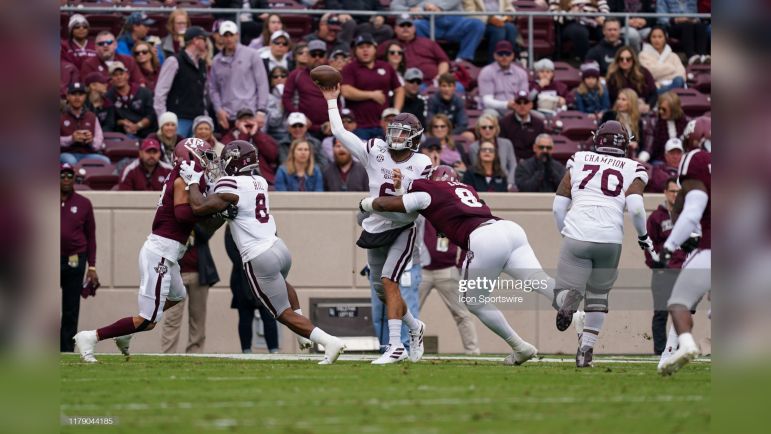 When the Pittsburgh Steelers drafted Texas A&M DL DeMarvin Leal in the third round at #84 overall, the expectation was for Leal to primarily play as a base DE in Pittsburgh’s defensive system yet can play up and down the LOS according to new DC Teryl Austin. While Leal had a breakout season of sorts in 2021, he was seen as a tweener going through the pre-draft process, lacking the natural size of a DT but also the explosiveness of an EDGE rusher. Still, his calling card coming out of College Station has been his ability to rush the passer, and that is exactly what we plan to breakdown in this film room.

Steelers Depot’s very own Andrew Shaver recently conducted a statistical breakdown of Leal as a pass rusher for the site, detailing his effectiveness by quarter, by down, and his usage on stunts upfront with the rest of the defensive line at Texas A&M. According to Shaver’s study, “Leal left College Station with 86 total pressures, accompanied by a 13.6% win rate and 9.4% overall pressure rate.” For a projected interior DL at the next level, those aren’t numbers to scoff at. Take a look at one of Leal’s better examples as a pass rusher against New Mexico, rushing off the edge against the LT where he hits and inside stab then rips through as he bends around the corner and eats up the QB for the sack.

While possessing impressive athleticism and quickness for a DL, Leal also brings versatility to the table, having played all over the defensive line for the Aggies. He has played as far inside as a nose tackle head-up on the center but has stepped all the way out to the 7-technique, rushing off the edge with his hand in the dirt or in a two-point stance. Here we see Leal head-up on the RT and gives him a hesi step on the snap of the ball, hitting him with a wicked inside spin move to get into the backfield where he tracks down the QB and brings him down for the sack.

While not known for being a power rusher, Leal has moments on tape where he showcases the ability to convert speed to power, particularly on the outside against the OT. He’ll catch OTs leaning forward to get a hand on him early. Lacking the necessary hip and knee bend to drop anchor and stall the rush. This is where Leal attacks like on this clip against New Mexico, attacking the LT with arms extended as he walks him back into the QB and finishes the play with teammate #2 Michael Clemons for the shared sack.

Leal will attack the outside shoulder of OTs when pass rushing off the edge, but he will look to counter inside if the tackle oversets or exposes his inside shoulder. Here is an example with a five-star matchup between Leal and OT #67 Charles Cross. Cross initially picks up Leal on his rush, but Leal uses his hand placement with inside hand on the chest and outside hand on Cross’s shoulder to bull rush him into the pocket, playing with good leverage. Leal proceeds to walk Cross, back into the passer while long-arming him, working to get his head and shoulders across Cross’s face and gets to the passer who holds onto the football too long to wrap him up for the sack.

Here against Ole Miss, we see a similar result as Leal initially tries to hit the jump/rip on the outside of the LT, but then changes it up into a straight bull rush, noticing the tackle having a poor base with his feet. The tackle loses his footing and starts to slide to the ground as Leal exploits the wide inside hole to the QB, swiping the tackle’s arm down and brings down #2 Matt Corral in the pocket for the strip sack fumble that his teammate ends up recovering.

While it’s great to see Leal post 12.5 TFLs and 8.5 sacks in his junior season as a bigger defensive lineman, a reoccurring theme I found was that many of his sacks were not of the “high quality” where Leal won with his hands but rather on extended plays where the QB held onto the ball too long and he was able to work back inside when he was stalled on his outside rush. For example, watch this play against Mississippi State where Leal gets beat when trying to get the corner but can counter inside when the two linemen bump into each other, creating space to run straight to the QB and finish with a sack.

When tackles don’t give Leal the inside counter and play him with square shoulders, he often is neutralized with his rush, having no viable counter move to get off the block. Watch this rep against Charles Cross who plays Leal with great technique, keeping his shoulders square and gets a great punch inside his shoulder pads. Leal is unable to knock Cross’s hands down and is locked down on the rep, as he lacks the power to drive Cross back as well as the hand usage to shed the pass block.

On this rep against Tennessee, we see Leal rush off the edge against the RT and do a good job pushing him back into the pocket of the QB with power. Still, he can’t get around his outside shoulder or counter back inside, getting the pressure but relies on his teammate to get the sack. Overall, not a bad play for Leal, but we see a need to improve hand usage to shed blocks to turn pressures into sacks.

Here is another example against the Crimson Tide back in 2020 where Leal faces #70 Alex Leatherwood and can’t win with power on his rush as Leatherwood’s long arms latch on and neutralize his rush. Leal is also unable knock his hands down and fight off the block in time before the pass is away, showing potential issues when facing bigger, longer OL that he will see at the next level.

Overall, DeMarvin Leal does bring a unique skillset to the table as a pass rusher. He has the athleticism to line up on the outside and come off the edge as a 4-3 DE, but also the size to kick inside and rush over the guard, utilizing his speed and quickness to shoot gaps and be a disruptive presence on the interior. GM Kevin Colbert said as much when asked about Leal during an interview on SiriusXM Radio, complimenting his athleticism and stating that he has “some linebacker-type movements”. Colbert also envisions Leal playing as a base DE and kick inside as a DT in sub packages use that speed and quickness on guards and centers, shooting gaps and being used on twists and stunts.

While he has good functional athleticism and versatility, Leal needs to develop more play strength in terms winning with power consistently on his bull rush and improve his overall hand usage to get off blocks rather than relying on extended plays as a pass rusher. Along with this, Leal needs to do a better job of finishing the play with the sack as he had plenty of opportunities on tape where he applies pressure on the QB but doesn’t get the sack. Developing a quality counter move as a rusher as well as becoming stronger with his lower half will be keys to how successful Leal becomes at the next level when it comes to being a pass rush specialist.

What are your thoughts on DeMarvin Leal as a pass rusher? Do you think that he can develop into a threat against opposing passing games at the next level? Will he be able to more consistent playing with power and his hand usage to work off blocks, or that his lack of size and high-end athleticism will handicap him and his effectiveness? Please leave your thoughts in the comments section below and thanks again for reading?