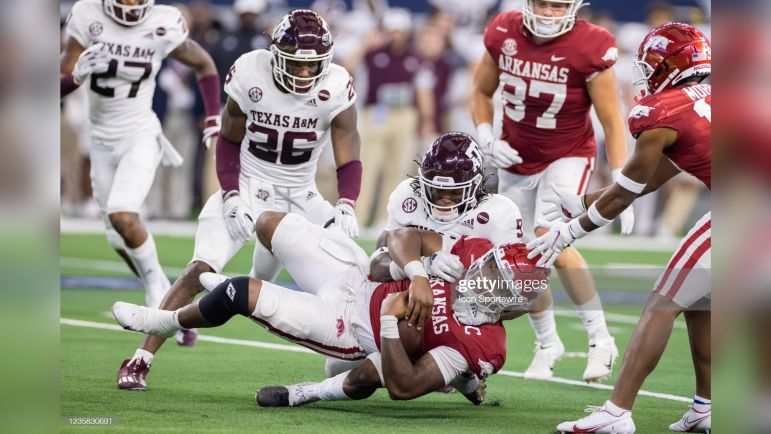 Seeing an uncertain future on the horizon for the defensive line, the Pittsburgh Steelers took a proactive approach in the 2022 NFL Draft, bringing in DeMarvin Leal out of Texas A&M via the third round, a player who can provide valuable depth now and develop into a starter at some point over the course of his rookie contract.

At least, that’s how it all works out on paper, but one can never be sure until it’s shown on the field. The Steelers are believers in Leal, and he has had the right things to say thus far since he was brought in, but the first real test will be when he gets the pads on, which won’t be for a while.

“I bring youth, confidence, I’m extremely disruptive and I’m smart on the field”, he told Teresa Varley for the team’s website after he was drafted. “I am intelligent when it comes to what I see, my instincts and following those, so I feel like that’s something to bring to the table”.

That combination of athleticism and smart play has come to define the defensive end position in the Steelers’ defense, with Cameron Heyward and Stephon Tuitt embodying that ideal for the past several years, the former for over a decade now.

And now Leal gets to come in and learn from Heyward and Tuitt and Tyson Alualu, something about which he has already spoken—a mentoring opportunity that he intends to exploit to the fullest extent of its benefit.

That goes for all aspects of the job, including how to take care of yourself as a professional, and as an adult, which will come easily enough. But there’s the matter of the classroom as well, which shouldn’t go overlooked for any position.

Fortunately, it’s an aspect of the game Leal already enjoys. “I like watching the little things that people do and how consistent they are”, he said. “With film, you can slow it down, you can speed it up, you can look at so many different ways and different angles”.

There is perhaps no better way to learn than by studying those who are already doing what you want to learn how to do and understanding how exactly they do it. He has the tools to be a successful player, provided that he puts the work in that is required to make the most of those assets.