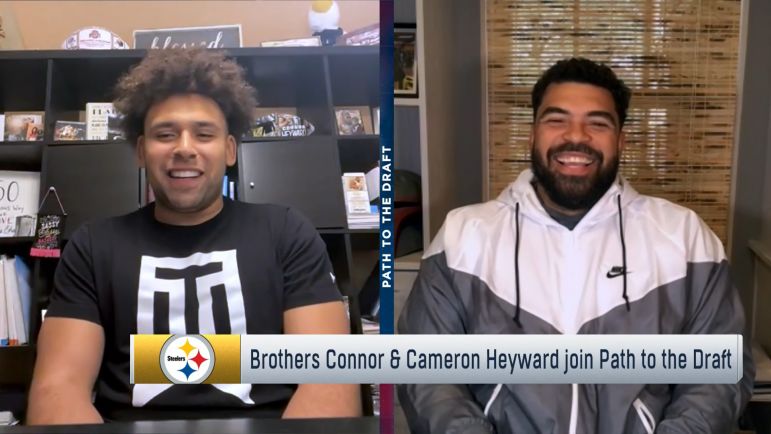 But like it or not, it’s a fundamental part of the story of the Steelers’ sixth-round draft pick, and it’s also a key part of the story of one of the more notable football families tied to Pittsburgh—the Heywards. That’s two competing legacies Connor is now tasked to live up to, as Cameron’s younger brother and Craig’s son.

“There’s a Steelers way and there’s the Heyward way, and he’s got to catch up in both”, Cameron said while appearing with his brother for an NFL Network segment yesterday. “For the most part, I think I’ve just got to make sure he learns everything. I’ve got to be an outlet for him. I’ve got to make sure he knows where to go, and how I like my breakfast in the morning”.

That last part is a joke, of course, as is the idea that Connor would actually be his roommate, a notion that both of them shot to hell rather quickly. The two have not lived together since Cameron went off to college, while Connor was still just a child. But that hasn’t stopped them from consistently being there for each other, and that’s certainly not going to change now that they’re coworkers.

Cameron, of course, will bear the brunt of the responsibility as the older brother and the guy who’s been in the league for over a decade and played at the highest level. He knows it’s his job to help put his brother in a position to succeed.

And that starts with the job at hand: playing the game. “On the football field, it’s making sure he’s at the game, he knows how to prepare, and that he’s willing to listen to everybody, because I’m not setting a bad reputation here”, he said.

Cameron has played his career striving to live up to the legacy his father left not just in the NFL, but also specifically in Pittsburgh, where he put the family name on the map as a standout player for the Pittsburgh Panthers. Connor now has to uphold the family name on behalf of both his brother and his late father.

That’s no easy task, and certainly the expectations will be different. But with big brother right there helping him along the way, you know he’s going to have every chance to be a positive contributor to this team, if he earns his way.