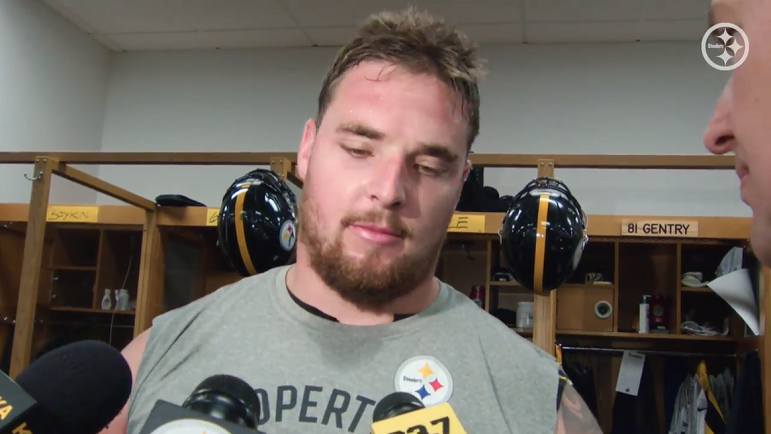 Reasoning: Not only has it seemingly been clearly established that Mason Cole is the Steelers’ center—with Kendrick Green competing with Kevin Dotson at the moment at left guard—but he is also quickly establishing himself as a leading presence, both in the locker room and in the media.

I don’t know exactly how good he’s going to end up being on the field. I do know that Mason Cole is going to be a regular presence in the locker room, and by that I mean, at least for our particular interests, I mean the locker room interview sessions. He is going to be the Steelers’ next frequently-quoted offensive lineman, along with James Daniels.

More importantly to the casual interest, he has also seemingly been established as the team’s starting center. While this was the prevailing assumption, the early portions of OTAs are evidently making it clear that this isn’t really going to be much of a competition, unless somebody like Kendrick Green can make it one.

Drafted in the third round a year ago, Green was the Steelers’ starting center for the majority of his rookie season, but he struggled significantly, for a number of reasons, some of which were not in his control—particularly playing a position with which he wasn’t comfortable.

But instead of waiting and hoping that he can develop there, the front office was active in free agency this year in signing Cole and Daniels, with Cole having repeatedly said on a number of occasions since his signing that his very clear preference is center over guard.

Now, does that mean that Green can’t eventually make it a competition if he ends up having a really good summer? I would say that, no, it doesn’t mean that. But it seems far more likely that he has a more realistic shot of cracking the starting lineup at left guard, where Kevin Dotson started for about half of last season before he was injured.