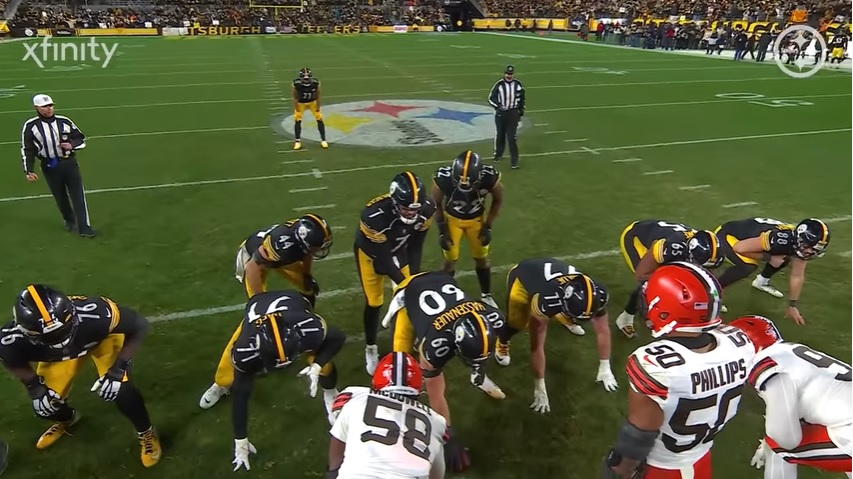 It was as storybook as storybook can be. Ben Roethlisberger’s final home game was a primetime, Monday night win over the Cleveland Browns that kept the Steelers’ playoff hopes alive. And Roethlisberger had the ball in his hands for the game’s final play.

Najee Harris’ 37-yard touchdown with under a minute to go sealed the Steelers’ win. But Pittsburgh unexpectedly got the ball back once more thanks to a Minkah Fitzpatrick breakup that led to Tre Norwood’s first career interception, bringing Roethlisberger onto the field for a victory formation that meant so much more than that.

Describing the moment at last month’s Ignite Conference, Roethlisberger joked about how Mason Rudolph tried to head out onto the field instead.

“The interception happens and it’s like, holy cow, I have to go back on the field,” he said. “Mason Rudolph, the backup, he grabs his helmet and I’m like, ‘no, no young man. Not yet. Not yet.'”

To be fair to Rudolph, Roethlisberger had his helmet off and was celebrating his final Heinz Field moments with hugs from teammates. But clearly, that chance for one final snap was one reserved for Roethlisberger, and there was no way he wasn’t taking the field.

“It’s the greatest play in football. Victory formation, take a knee. I was shaking. I was just like, ‘just don’t fumble. Please don’t fumble.’ Take that knee and then Derek Watt and [Najee Harris] grabbed me and hugged me. I felt the emotions. Guys were hugging me, Browns guys were coming up, emotions were through the roof. It was just so special.”

Roethlisberger didn’t fumble and took one final snap to close out the win (Mike Tomlin tried to call timeout but to no avail). As the clock hit zero, Roethlisberger stayed on the field and took a lap around the stadium to celebrate with fans, who remained at Heinz Field to watch their quarterback one more time.

“It was one of those things where you’re not even thinking about anything. I started going and giving high-fives around the stadium. I got halfway and I was like, it’s really cold out here and it’s a long way to go.”

For Roethlisberger, the most special moment was securing the win with friends and family in attendance to watch.

“The coolest thing about that whole night even more than the win was having my family there. I had so many friends and family that came to that game. I looked to the tunnel and all three of my kids ran out and tackled me. And Ashley was there. And my parents, my sister, my agent, the people who mean the most to me. And then we walked out. So that meant the most to me.”

Roethlisberger’s playing days wouldn’t end there. He played in two more games, an overtime victory against the Baltimore Ravens that put Pittsburgh in the playoffs (with help from Jacksonville and Las Vegas) before the team’s quick exit in the Wild Card round to the Kansas City Chiefs.

His football career wasn’t quite as magical as Jerome Bettis or childhood idol John Elway, who finished as Super Bowl champs, but it was just about the perfect way to go out.