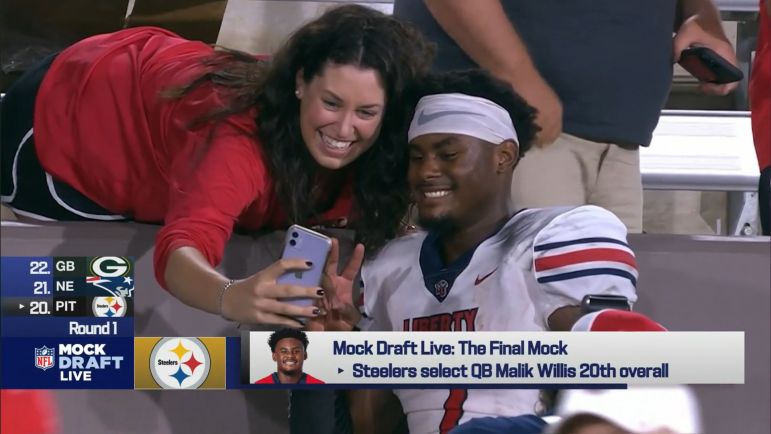 There is perhaps nothing less surprising one can do in a mock draft at this point than putting a quarterback in Pittsburgh. Seemingly over 90 percent of the mock drafts that have come out in the past month and a half have had one quarterback or another being selected by the Steelers in the first round, whether they had to trade up in the top 10 to get him or not.

Yesterday, the NFL Network hosted a live mock draft, with experts Daniel Jeremiah, Bucky Brooks, and Rhett Lewis alternating selections for each team, Colleen Wolfe jumping in as well. Lewis was on deck for the Steelers when their turn came to pick at 20, by which point the only quarterback off the board was Kenny Pickett to the Carolina Panthers at six. He comments on the selection:

Why is everyone so scared to take the quarterbacks in this first round? Do I have to do it again? Pittsburgh Steelers select Malik Willis out of Liberty at number 20 overall. Second quarterback comes off the board in this spot. The traits are tantalizing. DJ, you talked about him as the quarterback with the highest ceiling in this draft. You can certainly see that. The smile, it’s contagious. We saw him at his Pro Day. The excitement, the personality, he’s got it all. And they’ve got Trubisky there to kind of help him take some time to find his comfort level. Give me Malik Willis to the Pittsburgh Steelers with that ball cutting through the wind there at Heinz Field like it did at the Senior Bowl.

Interestingly, right before the Steelers’ selection, the mock has three wide receivers going off the board in rapid succession. Alabama’s Jameson Williams found his way to the Los Angeles Chargers at 17, followed by Ohio State’s Chris Olave to the Philadelphia Eagles at 18, and then Jahan Dotson out of Penn State adding to the New Orleans Saints’ group of pass-catchers.

What would you have done if it was your turn the pick in this mock? The first 19 selections up to that point:

You’re up next. The preceding players are off the board. What do you choose? You have your pick of quarterbacks outside of Pickett. The interior offensive line is untouched, as is inside linebacker. There are still tackles, wide receivers, and defensive backs out there.