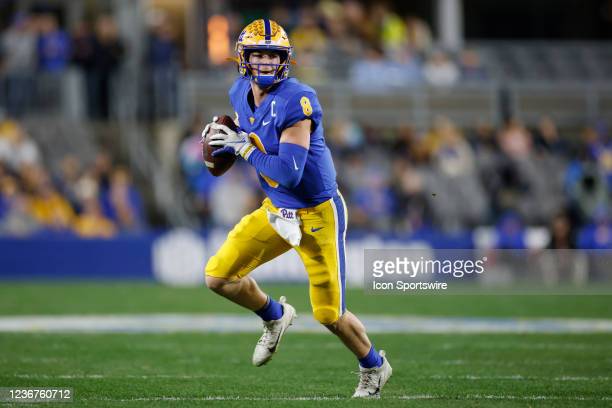 NFL.com analyst Bucky Brooks released his third and final top five prospects at each position in the 2022 NFL Draft on Wednesday. In his rankings, Brooks has Pittsburgh quarterback Kenny Pickett as the best in the class followed by Liberty’s Malik Willis, Cincinnati’s Desmond Ridder, Mississippi’s Matt Corral, and North Carolina’s Sam Howell. The one significant change in his rankings from the end of March was Corral dropping two spots to No. 4, which just moved Willis and Ridder both up a spot.

The Pittsburgh Steelers, by way of just showing up to their own practice facility, attended Pickett’s Pro Day back on March 21. There was speculation early on in the draft process that the Steelers would love to have the New Jersey native stay in Pittsburgh. But those rumors have been largely overshadowed by the alleged infatuation coach Mike Tomlin has with the more athletic Willis.

Brooks wrote this about the Pitt quarterback:

“Pickett is the headliner of the class with a combination of swagger, athleticism and arm talent that will pique the interest of coaches searching for a franchise quarterback with the intangibles to spark a turnaround. The former Pitt standout is the most pro-ready of the prospects due to his experience and expertise running an offense with pro-style concepts.”

Pickett has a unique combination of attributes that NFL front offices cling to and would be willing to spend a first-round pick on. Out of the top five, he has the most experience after appearing in 52 games as a Panther. The four productive years he had as a starter was enough for Brooks to tab him as someone that a sputtering franchise could look to in order to fast track a rebuild. That leads me to believe that Pickett is destined to be selected by a team like the Carolina Panthers or Atlanta Falcons, who both have a lot of work ahead when it comes to building rosters. Pickett could come in and be a leader immediately, which is why he could be off the board before the Steelers pick at No. 20.

Another option for the Steelers is Willis, who had a pre-draft visit with Pittsburgh on Wednesday. Willis oozes potential, as noted when Brooks compares him to two-star quarterbacks by writing:

“Willis has boom-or-bust potential with an intriguing set of tools that will have some coaches comparing him to Josh Allen and Lamar Jackson as a possible “one-man show” at the next level.”

Just the thought of having someone similar to the skill set those two quarterbacks possess has to be a dream scenario for Tomlin. And despite what some might say as playing against worse competition, I would be remiss without saying that Willis also had to deal with a lack of talent around him. All that aside, there’s no one with a better arm in the class, and if he can find a way to intelligently extend plays without turning the ball over, which is something he struggled with at times in college, then there’s no limit to how good he can be.

As noted previously, the biggest riser on the draft board has probably been Ridder, who has been linked to the Steelers recently. Brooks wrote:

“Ridder has been flying under the radar, but his experience and explosiveness make him an attractive option as a QB1 prospect.”

The former Bearcat might have the highest upside outside of Willis thanks to the way he processes the field and his ability to get to second and third reads downfield. His mind is certainly something that the Steelers would love to work with. If he isn’t there at pick 20, it might mean that some team believes he can stand in as a Day 1 starter, something that he wouldn’t be pressured to do in Pittsburgh.

As for Corral and Howell, those two are less likely to be chosen by the Steelers as it stands now. It’s going to be interesting to see where those two fall, especially Corral, who could realistically go as a top 10 pick or fall well beyond where the Steelers pick.