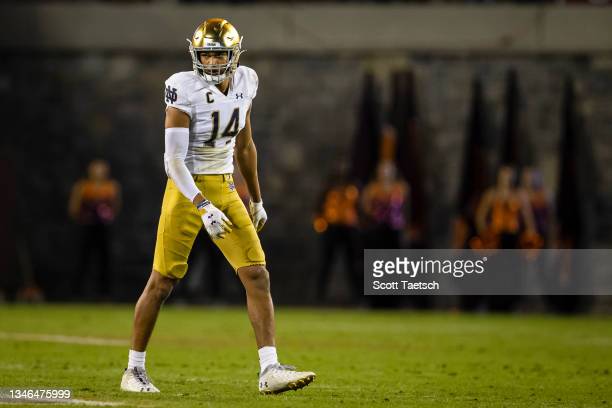 The Pittsburgh Steelers’ pre-draft visit list is filling up fast. After learning yesterday of a slew of quarterbacks who have met/will meet with the team, the Steelers have visits lined up with two of the top defensive players in this draft. According to NFL Network’s Aditi Kinkhabwala, the Steelers are scheduled to bring in Notre Dame safety Kyle Hamilton and Georgia LB Quay Walker for pre-draft visits.

Of course #Steelers are closely examining draft-eligible QBs. Maybe so they have practice for 2023. Maybe b/c they examine everyone. In the meantime… I’m told @NDFootball S Kyle Hamilton is scheduled for a visit to Pittsburgh 4/19, @GeorgiaFootball LB Quay Walker for one 4/20.

As she notes, Hamilton will visit on the 19th while Walker will visit the next day. Reportedly, the 20th is also when Liberty QB Mailk Willis is scheduled to make his way into town.

Hamilton is considered the top safety in this class but has seen his draft stock potentially slip with uneven workout numbers. After running a 4.59 on Indy’s fast track at the Combine, he reportedly ran in the 4.7’s during his Notre Dame Pro Day, leading some to wonder if he would fall out of the top 10. Perhaps that was Pittsburgh’s sign to jump in with a visit. With rare size at 6’4″, 220 pounds, he brings hit power, a high football IQ, and versatility to defenses, and is one of our highest-graded players this year. A team captain in 2021, Hamilton picked off three passes for the Fighting Irish this past year.

In our report on him, we concluded:

“Hamilton is as impressive as they come. He should be a year-one starter and the chance to become one of football’s top safeties. He’s athletic, physical, smart, versatile, who can cover, play the run, blitz, and be a leader and building-block for any defense.”

Walker figures to be another first-round pick. An athletic linebacker and part of that elite Bulldogs’ defense, he blazed a 4.52 at 241 pounds at this year’s Combine while also jumping 10’2″ in the broad. As a senior, he recorded 65 tackles (5.5 TFL) with three pass breakups and 1.5 sacks, helping lead Georgia to a national title. He’ll be one of several first round picks from that defense taken this year, including linebacker and teammate Nakobe Dean.

In our draft profile, here’s how our Tom Mead summed him up.

“He is a ball of clay a far from a finished product but the potential is there to be a force. Give him a year to continue to improve in all phases and you’ll have a key player in the middle of the defense. He may be best starting out as a WILL linebacker and using his athleticism. I see him with the potential to be a starting linebacker in the middle of any defense.”

Walker is projected to be an early second-round pick, with an outside shot of going in the first round.

Check out our full reports on both players below.