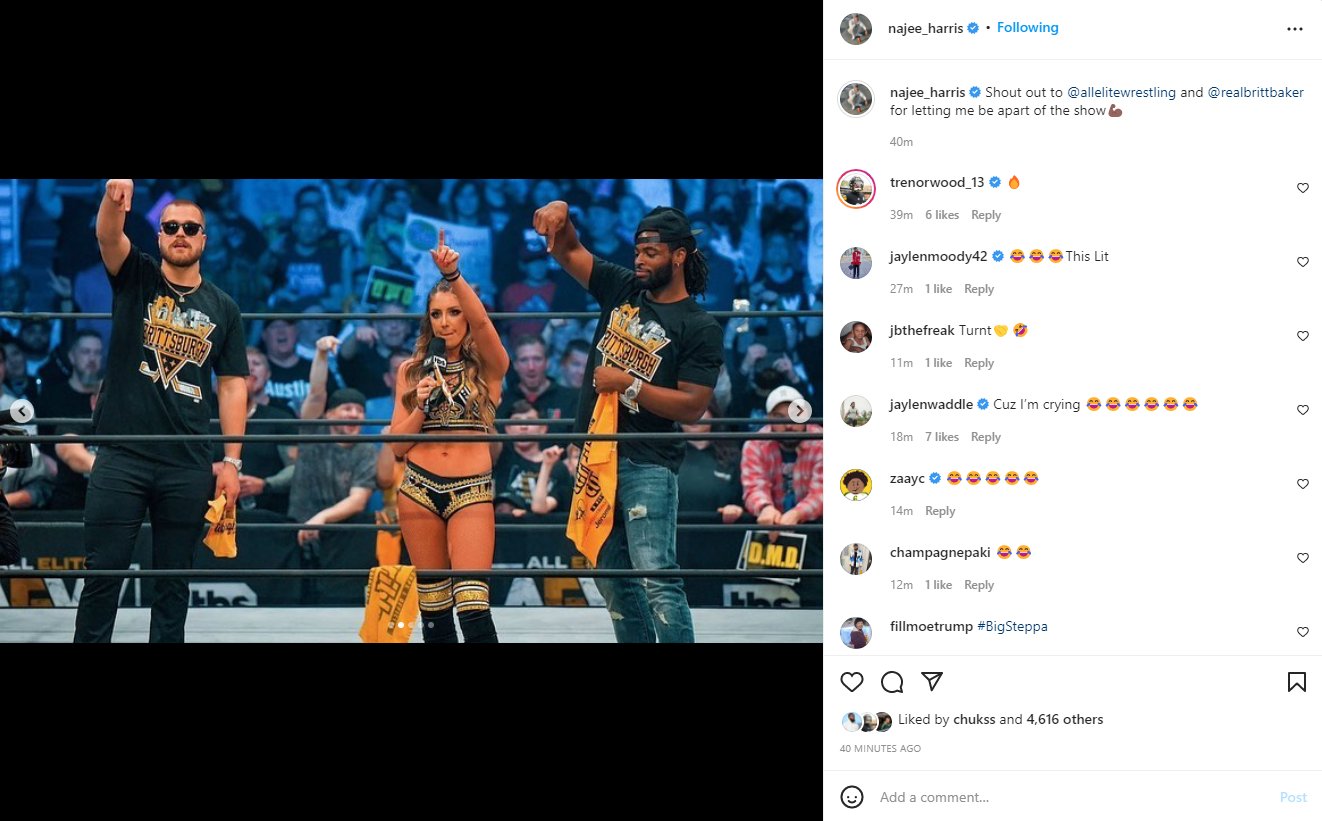 The brief taste of superstardom inside the squared circle of the AEW ring Wednesday night with Pennsylvania native Britt Baker and teammate Pat Freiermuth has Pittsburgh Steelers’ running back Najee Harris wanting a taste of the live action in the ring.

Harris, who came out behind Baker with Freiermuth sporting a Terrible Towel flag, appeared on Pro Football Talk Friday with host Mike Florio and discussed his appearance Wednesday night, stating he’d like to get a deal from the professional wrestling company, though in a (mostly) joking manner.

“I’m trying to be on there. I’m trying to get a little deal with them,” Harris told Florio, according to video via PFT’s YouTube page.

Florio, a bit surprised by Harris’s stance, followed up asking the Steelers’ star running back if he really wanted to get into the ring.

Harris certainly had a blast, even grabbing the microphone from Baker before AEW’s producers cut the microphone off before Harris could say anything to the crowd. The experience in the ring though before and after Baker’s match certainly has the Steelers’ star excited for the possibility of getting in the ring, even though he doesn’t have a ring name or a move planned out in full yet.

“I was watching all of them. I like I was backstage and I was watching how like all had no the little costumes and their names. I mean, I ain’t got a name yet. You know what I mean?” Harris said. “I ain’t got a costume either. I was just thinking about it. My mind was just spinning off of all the excitement I was going.”

Leaning into his abilities on the field though, Harris would probably go with a hurdle or something of the like, maybe even digging up something from Star Wars as part of his trademark move.

“Something with a hurdle, probably,” Harris said. “I hurdle somebody maybe go out the back ropes, maybe do a couple backflips, maybe run to my car, get something, eat, come back. And then like, I’ll come back with like they did come back and use the force. I’m gonna use the force, right?

“I’m gonna use the force. So, I’m gonna like act like I’m choking them, right? And it’s gonna be from a distance. I’m pick him up and I’m gonna slam him.”

Harris certainly sounds excited by the possibility of potentially getting into the ring at some point in his career, much like former NFL stars have in the past, including the likes of Lawrence Taylor, Reggie White, William Perry, and of course most recently, Pat McAfee.

Of course, there’s one little hurdle (pun intended) for Harris to get over regarding a stint in pro wrestling. The Steelers and head coach Mike Tomlin.

“I don’t think that’d go too well,” Harris said holding back a laugh, regarding any hypothetical conversation with Tomlin or the Steelers.