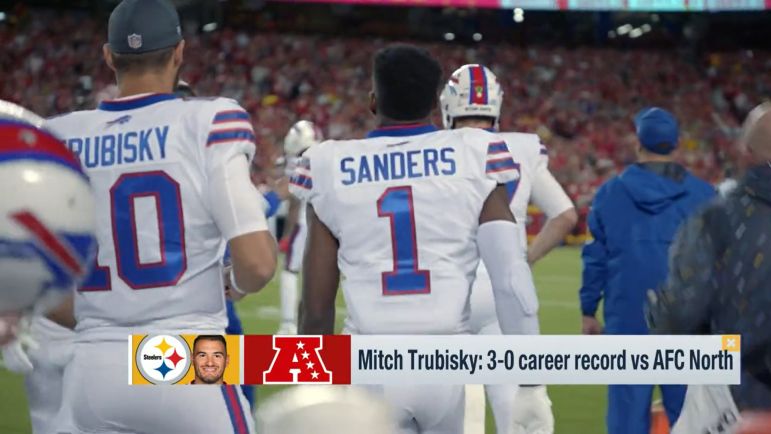 The Pittsburgh Steelers may have hitched their wagon to Mitch Trubisky at the quarterback position for the time being, but not very tightly. They only signed him to a rather modest contract with incentives, and it’s widely believed that they will try to add a quarterback in the first round later this month.

That said, there are still those who believe that they may have something in Trubisky, a former second overall pick who does have a winning record as a starter, and is sort of getting a reboot after spending last season as a backup with the Buffalo Bills behind Josh Allen.

One of his wide receivers last year in Buffalo was none other than Emmanuel Sanders, who spent his first four years in the league as one of Ben Roethlisberger’s targets. He appeared on Good Morning Football yesterday to talk about Roethlisberger’s potential successor, and his own former teammate.

“He’s kind of laid back, chill, but everything that I saw from him, I saw a guy who makes plays”, he said of Trubisky. “You talk about a guy who played [behind] Josh Allen. Sometimes it’s not so much the physical tools, it’s the mental tools”.

“Everything I know about the guy, he (Mitch Trubisky) produced when we called upon him.” — @ESanders_10

Are the Steelers better off today than they were at the end of last season? pic.twitter.com/J5bOt3UWQt

A third-round pick in 2010, Sanders is perhaps the starkest example in recent years of a player developing and taking his game to another level after leaving the Steelers. He went to multiple Pro Bowls and won a championship, and has carved out a long career for himself. He reflected on that in talking about Trubisky.

“I feel like when I was going to the Pro Bowl, or the Super Bowls, it wasn’t quite my physical tools, it was the way that I thought that got me in and out of games”, he said. “So what did Mitchell Trubisky learn from Brian Daboll, from Josh Allen? What can he carry on to the Steelers? How hungry is he from leaving Chicago, going to Buffalo, learning under them, and then having another opportunity to start? I’m looking forward to seeing what he can do. He’s an athletic guy, he can run, he can throw, and I’m looking forward to seeing it”.

Trubisky is ostensibly going to be asked to compete for the starting job this summer against Mason Rudolph, and potentially a rookie draft pick as well, but the betting money is on the free-agent addition to be under center on opening day.

If the Steelers do indeed draft a quarterback in the first round, they will be able to sit him for a year, or even potentially two years, behind Trubisky as a bridge starter. And if Trubisky ends up looking like the guy the Bears thought they were drafting, well, I’m sure nobody is going to be complaining too loudly about that.